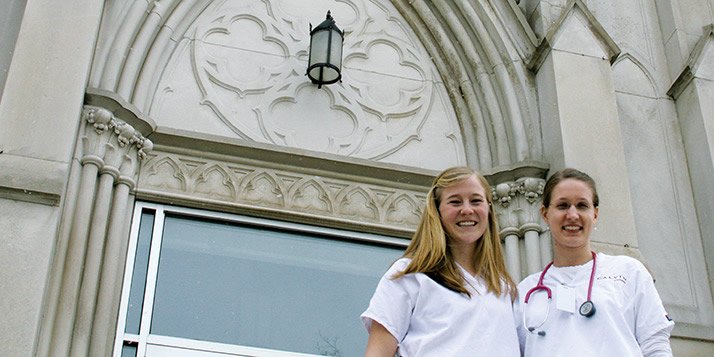 A northwest emergency food center is one place Calvin nurses are learning about healthcare.

On a recent Tuesday night at Supper House, located in the basement of a former school next to St. Alphonsus Church, local residents were eating lasagna and garlic bread at round tables scattered throughout the room. Some were going table to table, greeting their friends. And some were making visits to the table in the corner, where two Calvin nursing students were doing blood pressure checks and blood sugar screenings.

One of the students, senior Jen Pluymert, was advising a man to switch to diet soda to bring his blood sugar down. The other, Laura Schipper, was taking a break from her nursing chores to circulate among the tables, talking to people. “I love hearing the stories people have to tell,” she said.

Supper House is an emergency food center supported by North End Community Ministry and located in the Creston/Belknap neighborhood—one of the four neighborhoods where Calvin students practice community nursing. The nursing students visit Supper House every Tuesday and Thursday evening, and many of the people who use their services have been fasting all day in anticipation of having their blood drawn.

“We actually have a lot of people here who request the students to do the health screenings,” said Michelle Ford, Calvin’s community health worker in the Creston-Belknap neighborhood.

Performing these “clinicals” allows Pluymert and Schipper to hone their nursing skills while meeting a real-life need, Ford said: “A lot of people don’t have a primary care doctor, so we’re able to catch a lot of people who have diabetes and borderline diabetes, and that’s helpful.”

“These high numbers are a big deal when they are not taken care of, but they are so preventable,” said Pluymert, who has made several big “catches” with the residents of the neighborhood. Clients who need further testing and treatment are referred to nearby Catherine’s Health Center.

While they enjoy the training, they enjoy the people more:  “They give us a picture into the neighborhood we are serving,” Schipper said. “We can also learn directly from the residents what they think the needs in their community are.”

The Supper House rotation is not the students’ only duty in the Creston/Belknap neighborhood. They also help lead support groups there for diabetes and depression. “I think that’s where people really open up and are vulnerable. It’s more of a conversation than a lecture," Pluymert said. As part of Calvin’s “Preconception Reproductive Knowledge Promotion” (PRENOP) program, the students visit women in the neighborhood, talking to them about issues of pregnancy planning. They also organize the annual Palmer Health Fair, held in April at Palmer Elementary School. The students operate out of a classroom in the former school, where they store their materials and meet to strategize.

“You need to go where the people are,” Calvin nursing professor Deb Bossenbroek summarized the community nursing philosophy. “It’s hands-on experience as well as students teaching about what kind of care the client needs.” Bossenbroek oversees all of the efforts in the Creston/Belknap neighborhood, and she believes the students working there are being stretched both vocationally and spiritually by the experience. Many of them are encountering firsthand—and for the first time— people who lack access to care:

“For the underserved individual, their med list will be from the four-dollar list that’s available to them. They might need a family member assist them instead of a home health care worker. They might have a member of their church assist them instead of a counselor,” explained Bossenbroek. The students’ Creston/Belknap clients might also try to ration diabetes test strips or medications or use other strategies to make their resources stretch. As they make their clients aware of all of the health care resources available to them, the students are meeting the wide-range of clients they’ll someday be meeting as nurses in clinics, hospitals and other settings.

“Definitely a different experience than I had when I was going to school,” said Bossenbroek, who graduated from the Calvin/Hope joint nursing program in 1986. “Students have a more well-rounded experience and a more autonomous experience.”

Calvin student nurses provide similar services to those they offer in Creston/Belknap in three other Grand Rapids neighborhoods: Baxter, Heartside and Burton Heights. (The services offered vary from neighborhood to neighborhood.)

The nursing program fosters community not only in neighborhoods but among the nurses, said Pluymert: “Once you’re in the program, your classes are smaller, so you really get to know people. And the group I was with last year, I’m with this year.”

Schipper, who graduated Calvin in 2006 with a music degree, returned last year to train as a nurse. “It’s the human interaction that I missed,” she said. 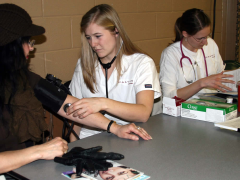 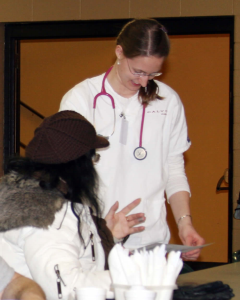 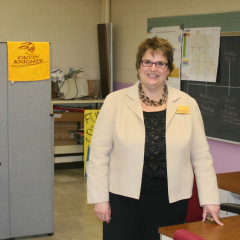 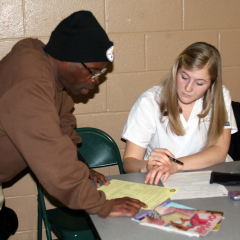