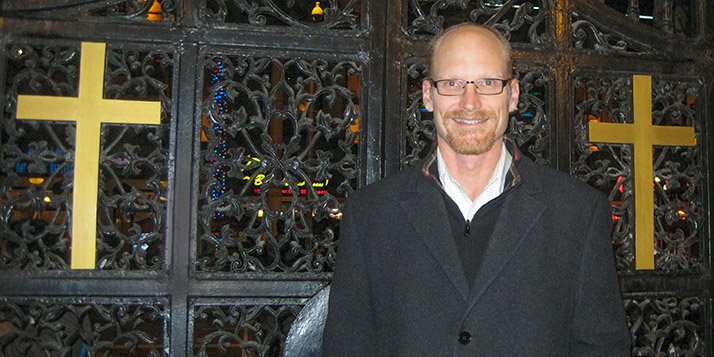 Kevin den Dulk says students must focus on Asia and the global south.

For Kevin den Dulk any discussions on Christianity and politics in the years to come must be framed in a global context.

“The most important movements in worldwide Christianity today are in Asia and the global south,” den Dulk said. “So to study how our faith intersects politics means we have to think about Christianity outside its historical centers in Europe and North America.”

A specialist in political participation and culture, den Dulk plans to bring that broader global perspective to his new work as the second director of the Paul B. Henry Institute for the Study of Christianity and Politics at Calvin. The institute (whose name honors a former Calvin political science professor and U.S. Congressman) was created at the college in 1997, and for 15 years political science professor Corwin Smidt was its director. In January of 2012, he handed the reins to den Dulk, who plans to build on his predecessor’s foundation.

By taking a global perspective, den Dulk is quick to point out, he does not plan to move away from matters of largely local or national concern. “Far from it”, he said. “But even ostensibly domestic interactions between faith and public life increasingly have transnational implications. Christian scholars are called to help fellow Christians and the broader community understand the importance of these dynamic and ongoing processes. I see the Henry Institute as remarkably well-positioned to support that calling.”

Civic education for the next generation

Den Dulk also wants to see the Henry Institute connect in more intentional ways to current college students, an area he thinks is ripe for expansion. “The Institute is not a free-floating think tank with a narrow audience,” he said. “It is situated at a Christian liberal arts institution with a supportive community that is both deep and increasingly wide.

“I see young people as an integral part of that community. And the stakes are high: levels of civic participation and civic knowledge in younger people are chronically low and arguably getting worse. The institute is well-suited to lead as a civic educator with college-aged and even younger students. But it can do so only by strengthening their conviction that their participation matters.”

The son of a central California poultry and almond farmer, den Dulk is a 1992 graduate of Calvin with a bachelor's in philosophy. (He went on to earn master’s and doctoral degrees in political science, the latter at the University of Wisconsin).

Den Dulk said he still remembers his first Calvin class: introduction to political science with Corwin Smidt. It was a class that captured his imagination and got him thinking more deeply about the intersections of politics with other areas of life, including philosophy.

He wants to see the next generation of Calvin students develop the same perspective. Already this fall, in conjunction with Calvin’s Center for Social Research, he launched “Visualizing Public Life”—a data visualization contest. Designed for current Calvin students, the contest focuses on the new ways in which data can be “pictured,” through a wide array of sophisticated, interactive computer-based tools.

Data as a moral act

“One of the key challenges of the digital age,” he said, “is to use advancements in computing power to produce meaningful information. We now have a range of remarkable tools to help us transform raw data into refined interpretations. Businesses, scholars, media outlets and non-profits are increasingly seeking to visualize information in ways that are both innovative and edifying. Yet the use of these tools is too often uninspiring at best and exploitive and obfuscating at worst."

The goal of the competition is not merely technical and practical, den Dulk emphasized. “We also want to foster moral discernment about how visualizations are produced and interpreted,” he said.

He cited Edward Tufte, an American statistician and professor emeritus of political science, statistics and computer science at Yale University who considers the presentation of evidence on any complex phenomenon to be a “moral act.” Den Dulk added: “How data are collected, manipulated and represented raises a host of questions about quality, relevance and integrity. Clearly, as Christians who are called to love our neighbors and serve the Kingdom of God, we have a stake in offering answers to these questions. The current contest will help our students wrestle with questions and, we believe, come up with answers.”

“Visualizing Public Life” will culminate at next spring’s seventh biennial Symposium on Religion and Politics, an event, den Dulk said, that allows political scientists to present current research, to foster professional networks, to facilitate joint research endeavors and to learn about research opportunities. Linking the student contest to that professional conference is a way to get Calvin students mixing with people from around the country and around the world who have made political science their life’s work.

In bringing together the practical and principled elements of public life, den Dulk hopes he is paying homage to Henry, a man he said exemplified such an approach to politics: "Paul Henry was a model of bringing together the very best intellectual reflection on Christianity and public life—both empirical and normative—with the day-to-day practices of citizenship, governance, and policy-making."

Den Dulk came to his work at the Henry Institute after a stint as Calvin's Spoelhof Teacher-Scholar-in-Residence Chair. Prior to that he spent a decade as a professor of political science at Grand Valley State University, where he won awards for mentoring undergraduate research, working with political science interns and incorporating service-learning into the classroom.

Den Dulk's academic research has ranged from electoral politics to religious freedom in China, and he usually works collaboratively. Among his many publications are several on which he partnered with Smidt as well as current and former Calvin political science professors James Penning (now deceased), Stephen Monsma and Douglas Koopman: The Disappearing God Gap? Religion and the 2008 Elections, and Pews, Prayers, and Participation: Religion and Civic Responsibility.

In recent weeks, den Dulk and Jonathan Hill, a professor of sociology at Calvin, have been getting national media attention for a project they have been working on called “Religion, Volunteering, and Educational Setting: The Role of Youth Schooling Type on Civic Engagement.” It will be published in the Journal for the Scientific Study of Religion and was the subject of a recent podcast. The study, said den Dulk, suggests that private, Protestant schools do the best job of creating lifelong civic engagement, better by far than private Catholic schools, public schools and even homeschools.