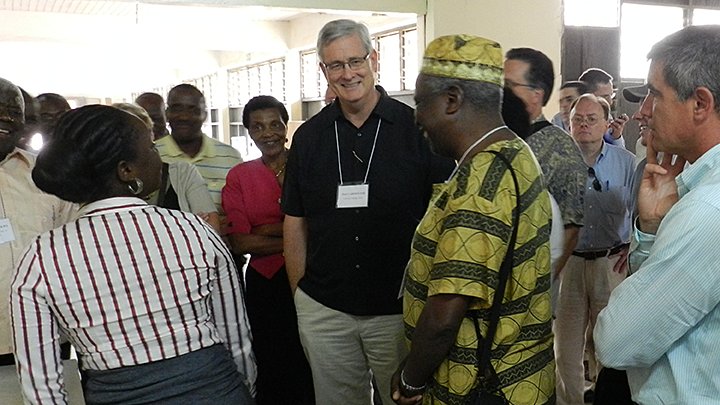 Joel Carpenter says pat answers are not going to fix what ails Africa.

“It’s not enough to say we’re going to address African problems theologically by taking a seat-of-the-pants look at an issue then going to the Bible,” said Carpenter, director of the Nagel Institute for the Study of World Christianity.

Enter the Templeton Foundation. The organization is distributing $2.07 million over two years to the Nagel Institute to increase Christian scholarship in Africa.

“The Templeton Foundation came to us,” Carpenter said. “They said, ‘Help us see what might be possible for us to do in Africa.’”

Carpenter said the money will help African scholars address social and religious issues that have been long neglected, such as patriarchy and hierarchy within leadership structures.

A wave of applicants

As of the deadline, Sept. 15, 152 African scholars had sent initial proposals to receive a portion of the grant funding for their projects, which will result in at least a couple of published books and two dozen scholarly articles.

According to Carpenter, eligible candidates are those with a Ph.D. living in Africa and working in theology or the social sciences. A selection committee will score each candidate’s proposal, and about one-third to one-half of the initial applicants will be invited to make full proposals to receive grant funding.

“Those [full proposals] need to be in by early December,” Carpenter said. “In mid-December, we will convene the selection committees. We will meet in Accra, Ghana in West Africa and select a dozen winners in each of the programs.”

Carpenter said social sciences and religion were the focus of the grant funds because the two fields of study go hand in hand.

“It’s a complementary set of problems,” he said. “On the religion side, theology in Africa has availed itself of social science research or philosophical thinking, but I think a lot of that work was done by an earlier generation, and it really needs to be freshened up.

“African theologians in the ’60s, ’70s and ’80s were looking at social science research on Colonialism or the after-effects of Colonialism in Africa. We are very much past the Colonial era now. The last vestige of African-European Colonialism was the apartheid regime in South Africa, and that met its demise in 1994.”

Carpenter said on the flip side, social scientists need to pay attention to the influence of religion on culture in Africa.

After the grant recipients are selected, there will be a research workshop held for them in Cape Town, South Africa, in March 2016.

“At that workshop, we will have leading experts on African theology, African social science and religion in African society, talking about trends and issues and methods in their fields,” Carpenter said. “This is an opportunity for the grantees to share ideas with each other, to receive fresh insights and also some mentoring and advice from a panel of expert African scholars.

“The money will pay for all of that and also a big summit at the end and editing the initial research articles that come out of these grants into books or special issues of journals.”

Staying in step with the mission

Carpenter said the work fits with both the Nagel Institute’s mission to promote world Christianity and with Calvin College’s mission.

“Calvin’s goal for a long time has been to be a center for Christian thought,” he said. “So here’s one way, in one particular area of the world, and area of inquiry, for Calvin to fulfill that obligation.”