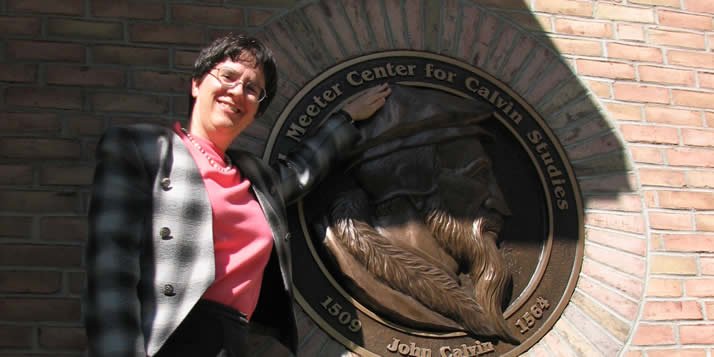 In 16th-century France, Protestants and Catholics living in the same village wrestled with questions like the following: what if your Protestant grandson wants to marry a Catholic girl? High school teachers will have the opportunity to wrestle with these and other related questions via “Making Sense of the Reformation.”

In 16th-century France, Protestants and Catholics living in the same village wrestled with questions like the following: what if your Protestant grandson wants to marry a Catholic girl? How do you handle worship services for both groups in a community that has only one church building? Do you send your child to a school operated by “the other” faith community?

High school teachers will have the opportunity to wrestle with these and other related questions via “Making Sense of the Reformation,” a three-week summer institute made possible by a $118,116 grant from the National Endowment for the Humanities (NEH) to the H. Henry Meeter Center for Calvin Studies. The institute will be co-taught by Meeter Center director Karin Maag and Calvin history professor Robert Schoone-Jongen.

One focus of the institute is dealing with religious conflict, also a focus for education nationwide, said Schoone-Jongen: “In the social studies standards that states have, the ideas of religious tolerance are a major priority.”The group will study methods of 16th century-style conflict resolution—on a range of issues—for Christian groups of that era as models for similar issues today. “I think an institute like this is a chance for participants to reflect on the challenges of this dramatic religious change and perhaps make connections between the ordinary Christian’s experience in the Reformation and experience in today’s society,” said Maag.

It’s all about relevance and applicability, said Schoone-Jongen; to teach successfully on the high school level, teachers must relate what they are teaching to the world that students already live in and know. “They will learn better if it’s something that they can understand and something that will help them understand their own world better and immediately,” he said.

Schoone-Jongen is looking forward to being on the giving end of an NEH summer program, since he has attended several institutes as a teacher seeking inspiration: “It was a great way to recharge your batteries as a high school teacher because you get to really dig into history in a way you can’t do with high school kids,” he said.

Maag agreed, adding: “Our hope is that the participants will go back energized and even more confident in their ability to make the Reformation come alive for their students.” She is also hoping that the institute gives a wider exposure to the Meeter Center, one of the preeminent centers for Calvin studies in the world. “We have an unparalleled collection,” she said, “and, of course, next year is John Calvin’s 500th birthday, and we’re expecting a lot of interest.”