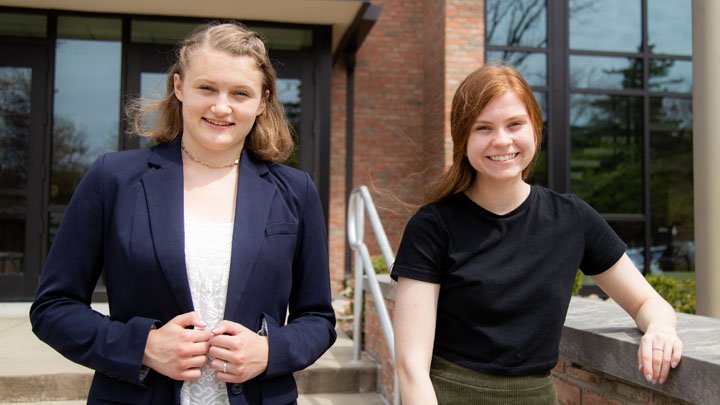 “I’m not writing for me. I want to write for other people,” said sophomore student Abigail Ham. “I really wanted to get my work out there.”

And that is exactly what she is doing. Ham and her fellow English major, Brooke Adelman, both received acceptance notifications from literary magazines this month. Ham’s short story, “The Tree in Harvey Park,” was published in Blue Lake Review and Adelman’s poem, “A Fault Finder Contending with the Almighty,” has found a place in The Albion Review.

“To publish creative work as an undergraduate not only attests to Abbie and Brooke’s talents; it also signals their dedication to finding a literary community in which to read and write,” said Professor Jane Zwart. “The editors who chose their work, the writers whose words their words will appear alongside, the readers who warm to their voices: those people are the beginnings of a network, a source of further opportunities and creative energy.”

Both Adelman and Ham have been impacted heavily by the writing courses that they’ve taken at Calvin. “In ‘The Craft of Writing,’ we spent a lot of time reading poetry, and I really grew to love it. We were reading pieces that had a lot of emotion and were complex. There was a lot to analyze, and I really liked that,” explains Adelman. One poem especially influenced her own work.

“‘Answers from the Whirlwind’ by Amit Majundar is a response to when God is asking questions to Job in the Bible. There is a lot of emotion there, and the speaker almost comes across as angry or infuriated but also still holds a reverent bewilderment for God,” said Adelman. “I really wanted to mimic that kind of style.” Adelman’s own poem is written from the perspective of somebody who is on the outside of the ark viewing the terror and panic as the world around them is destroyed. The poem questions why God saved some people but not others.

Ham was also influenced by the readings from her classes. “In my creative writing class, we read some Mary Oliver. I had already had a connection with Mary Oliver, but that reinforced that. I read a lot of her.”

Ham’s work is often connected to her roots in Vermont, reflecting her hometown and the surrounding nature. Her short story is written in different perspectives and narratives that are all centered around one tree. Ham explained that she was sitting at her desk in October and looking for inspiration to write. “I had all these photos on my desk that my grandma had sent me of these trees from back home. So that’s how this story ended up being centered around this tree. I just sat down and wrote it all on a Saturday and then came back to it and edited it over a month or so. And then I submitted it.”

Both students found their professors to be helpful in their journey to getting published. “The Craft of Writing” requires students to submit a piece of writing to a publication, whether it be an on-campus publication like Dialogue or an outside publication. Professors also make sure that Adelman, Ham, and other writers are staying informed on what publication opportunities are out there, something that students may have a hard time doing on their own.

“Across disciplines, faculty at Calvin teach students how to do their best work—what questions to ask, how to test and refine the integrity of their efforts—but part of our task is also, often, to nudge our students to realize what they have it in them to accomplish,” said Zwart. “We do want our students to ‘walk humbly,’ but we also want them to be brave, to take risks, to shine. And the part of this work that includes cheering students on from the sidelines—before graduation, at graduation, and forever after—that is a joy.”

“I would say that my English professors are my biggest cheerleaders,” said Adelman. “Professor Zwart has been sending me different publication opportunities even though I’m no longer in her class. Just the fact that she knows I have potential and wants to keep me in the loop in all these literary circles that I may not be able to find on my own is a huge blessing.”

Both Adelman and Ham are working towards double majors at Calvin. Adelman is studying French and Linguistics with an ESL minor. Ham is pursuing a double major in Writing and Politics, Philosophy, and Economics (PPE). As second-year students, they have more classes to take and new paths to discover—but for now, being accepted by a literary magazine is a step toward getting their work read.

“This is a good step in getting my work out there,” said Adelman. “Something I really want is to have my faith and my love for God communicated in my work. I hope that when people read my work that they can see that love and are drawn towards it. There are big questions that Christians grapple with. It’s okay to not understand God and to not understand why he does what he does all the time. I want there to be more awareness that it’s okay to be asking these big questions. I’m hoping that as I continue to write, I will continue to tap into that.”

Ham added, “It’s kind of reassuring and validating to have something accepted, because it’s validating of my writing ability. So whatever field I end up in, whether it’s journalism or editing or whatever I end up doing, it’s nice to have that.”

“Professor Zwart just sent an email that she’d been talking to the editor-in-chief of an online review and recommended that students apply there,” said Ham. “So, I’m going to submit to that one next.”