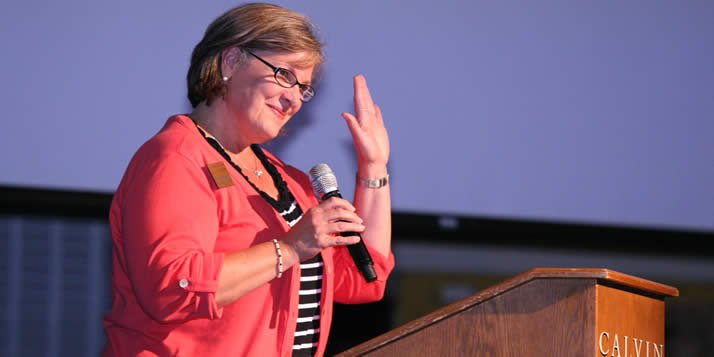 Jeanne Nienhuis has served Calvin for more than three decades.

The highest honor any Calvin staff member can receive, the award has been given to a staff member for their dedication, service and performance each year since its inception in 2002. The honoree is chosen by a committee, and this past March the enrollment communications team sent that committee a letter nominating Nienhuis.

“She really embodies the spirit of Calvin,” she said. “She thinks deeply about the messages we send from every angle before we send them. She would never say ‘I am Calvin College,’ but she is because of the way she thinks.”

“She’s an inspiration for us as women in the workplace. She’s right in the trenches with us—extremely hard-working. We wanted to honor that.”

The commendation comes after nearly 33 years of service to the college in the admissions office. In fact, Nienhuis started working there while she was still a student.

After graduation, Nienhuis and her husband, both education majors facing a challenging job market, agreed to settle down wherever one of them got a job. Her husband found one in Grand Rapids.

Since she was staying in the area, Nienhuis accepted an invitation to continue the administrative assistance work she’d been doing in the admissions office as a student. She thought the position would be a temporary one—something to do until she found a teaching job. She’s been working in admissions ever since.

“I kept looking for teaching jobs, but job opportunities kept coming up at Calvin,” Nienhuis said.

Nienhuis held a number of positions in admissions—Fridays at Calvin coordinator, admissions counselor, director of campus visits and hospitality, just to name a few—before taking on her current role as director of enrollment communications. In this position, Nienhuis focuses on communicating what the Calvin experience has to offer to prospective students.

While Nienhuis has achieved a lot along the way, three accomplishments stand out in her mind.

The first was growing the college’s visit programs. When Nienhuis started, the admissions office hosted around 400 prospective students annually. Today, Calvin welcomes upwards of 2,000 student visitors to campus every year.

Nienhuis also recalls being part of the team that developed Calvin’s first tagline, “Minds in the Making,” working with Crane MetaMarketing to create it.

“I love the trajectory ‘in the making’ provided—that learning is an ongoing process. It also suggests that since we’re ‘in the making’ there is a maker. I think the tagline helped position Calvin in the higher ed marketplace as a college where academic excellence and faith are taken seriously.”

Most recently, Nienhuis’ team developed Verge, a publication that goes out to prospective students three times per year.

“Verge captures Calvin’s story in a way that is current, energetic and invites students into the experience,” she said.

A Focus on Relationships

Individual achievements aside, Nienhuis says the process of capturing the Calvin experience is collaborative.

“I love the creative team of young professionals I work with. They are always coming up with new ideas … They know what they’re doing, but they also know Calvin College,” Nienhuis said.

Her team values her ability to facilitate that collaboration.

“She’s great at working with people’s strengths and weaknesses and using them to create the best product,” Ver Heul said.

Her colleagues also appreciate her care for them as people.

Assistant director of admissions visits and events Vanessa Abreu, who worked for Nienhuis for three years, noticed that the first time she met Nienhuis.

“When she hired me, our first meeting was just get-to-know-you-type stuff—she asked about my family. More than a boss, she’s a friend,” she said.

“She invests in us without any qualms personally and professionally,” added Graff. “She’s a mentor at heart.”

Nienhuis views that investment as far more than a mentoring opportunity.

It may have been this relationship-oriented approach that caused longtime friend and Calvin colleague Nancy Westra to remark:

“She’s the kind of person that I suspect a lot of people say this about: ‘I’d like to grow up to be like Jeanne.’” 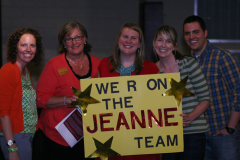 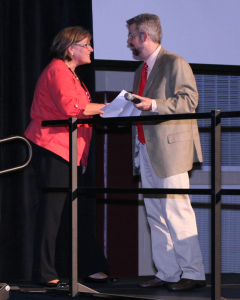