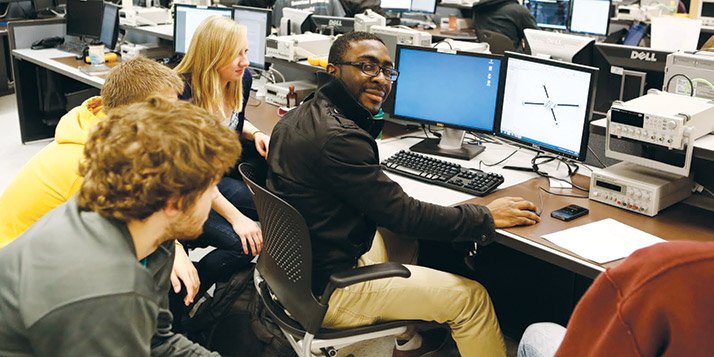 Working in teams of four or five to design and build an aircraft, each group also decided on a purpose and business plan for its use: Team Inventory Control’s quadcopter would monitor inventory high on warehouse shelves, replete with an RFID scanner. Team Public Announcement’s quadcopter would be fitted with a speaker that provides public service announcements, such as for an area affected by a natural disaster. Team Mail would pick up mail at the end of a driveway and deliver it to its intended recipient. Team Waiter would retrieve empty glasses.

Students expressed a range of expectations for their final product. Team Mail exuded confidence that their quadcopter will take to the air, while team Public Announcement wasn’t so sure. “Our biggest worry is that it won’t fly but will fall down and tear itself to shreds,” said junior Jake Roorda.

Advances in technology over the past decade—such as weight of materials, battery quality, GPS module and microprocessors—have made quadcopters feasible. Brouwer estimates that there are half a dozen or fewer in use in West Michigan, including one by Calvin alumnus Craig Newhouse, who demonstrated his machine on the first day of class. A landscape architect, Craig wanted to photograph his work from a low altitude but could not find someone to do it, so he started a business, Hovercams, that deploys a quadcopter equipped with a digital camera to take aerial photographs for landscape design and marketing purposes.

To make parts for their quadcopters, three of the four teams intend to use Calvin’s brand new 3-D printer. The 3-D printer reads CAD drawings that students create on engineering lab computers and uses micro-layers to print plastic parts. On the eighth day of interim, Team Mail had a jump on the rest of the class: they had a motor mount in production already and were waiting several hours for the plastic part to emerge from the printer.

Since quadcopters are quite new and uncommon, there are no rules governing their use.  Students developed an extensive list of safety procedures to guard against injury while operating the machines. “We want to make sure they fly safely,” stated Prof. Brouwer. “We don’t want anyone getting an unexpected haircut or losing a finger.” They also spent time considering ethical implications, such as spying, posed by the technology. “This technology could be misused, so we wanted students to think about the ramifications before designing their quadcopter,” Kim explained.

The interim class evolved due to Kim’s research interests in autonomous robots and technologies for disaster relief. Professors Kim and Brouwer wanted to offer a hands-on opportunity to make a high-tech device collaboratively with students from multiple engineering disciplines, since students will need cross-disciplinary skills when they enter the workforce.

When asked if teams were collaborating or competing with each other, mechanical engineering student Afa Malu replied, “So far, we’re mainly collaborating. But we may get more competitive when we see each other’s products in test flight.” All that cooperation will end on the last day of class, when teams will compete in the world’s first Quadcopter Olympics.  The games will include tests in speed, accuracy, strength and agility. 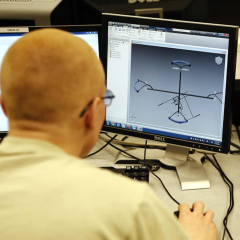 Watch Craig Newhouse demonstrate his quadcopter for the class.