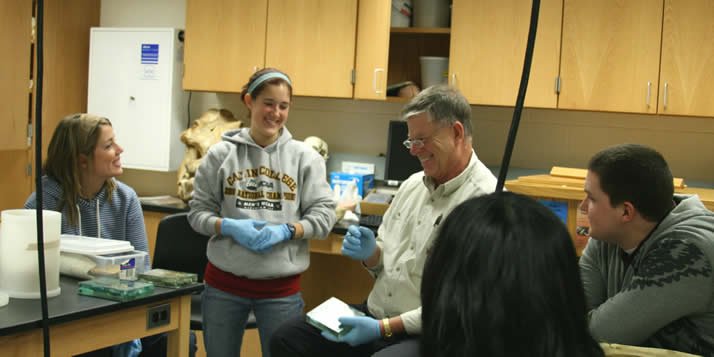 Senior Jodi Datema wasn’t going to take a course this interim. Then an offering from the biology department caught the eye of the speech pathology major from Zeeland, Mich.

Senior Jodi Datema wasn’t going to take a course this interim. Then an offering from the biology department caught the eye of the speech pathology major from Zeeland, Mich. The course, Clinical Neuroanatomy, would be the difference between a January spent catching up on sleep and one spent in class for three hours each day learning about the anatomy of the brain and spinal cord.

A description of the course from the registrar’s office spells out exactly how Datema would be spending her interim:

The course wouldn’t be a breeze, but, she said, it would be a great introduction to the anatomical structures that if damaged, can cause speech problems. With plans to attend graduate school in speech pathology next fall, Datema hopes the course will give her a good start as she prepares for her career.

“I really wanted to bulk up my knowledge of the brain,” she said.

Not for the faint of heart

“Students in this class are interested in learning for the sake of learning, not to get a grade or to pass the (medical) boards,” he said.

Even though it employs the typical pass/fail grading system used by most interim courses, Clinical Neuroanatomy isn’t for the student looking to log an easy three credits during interim. Daily textbook readings, three exams and an in-depth presentation on neurological pathology are all on the syllabus. Students also spend time in a biology laboratory and two days at a local hospital.

Indeed, Clinical Neuroanatomy is more of an introduction to the rigors of medical school for the seven pre-med students in the class than anything else: “Most of these students will go on and study these things in more detail, but they’ll already have the big picture in front of them,” said Tigchelaar.

One picture students will carry with them as they go on to further education is that of the brain cutdown they watched at Spectrum Butterworth hospital in downtown Grand Rapids. They watched as a neurologist sliced—centimeter by centimeter—through a brain visibly exposed to trauma.

“It was really interesting to see cut by cut the story of what happened to the person’s brain—where the artery burst and how the pressure that created actually shifted the entire brain,” said junior pre-med student Marian Mooi.

Class sessions are marked by an introduction to a host of Latin and Latinate terms students will have to memorize to make it through medical school and other graduate school programs.

“Antisympathomimetic,” Tigchelaar says in perfectly even meter. Some students venture to repeat the word after him, but most get lost midway through the medical tongue-twister.

The word won’t be on the exam, the professor says, but students will probably come across the term sometime in the future, especially if they find themselves prescribing antisympathomimetic drugs to patients with hypertension or heart problems.

The students absorb things quickly, asking questions to clarify complicated concepts along the way. At times, they are stumped, but not for long.

“If a stroke in the right cerebral cortex leaves the left lower side of a person’s face paralyzed, why can the person still blink both eyes?” Tigchelaar asks.

Students scratch their heads and consult their notes. Soon, a diagram is drawn on the board showing lines stretching from the right and left cerebral cortices to different portions of the human face. It turns out that even if information isn’t getting from the damaged right cerebral cortex to the eyes to allow them to blink, the left cortex is able to take control over the function. All at once the classroom is filled with the sound of pens scratching paper furiously.

Every so often, the class conversation turns from cranial nerves and the parasympathetic system to concepts that elude diagrams and medical labels. Professor Tigchelaar tells the story of how he came to Calvin from a position at Indiana University’s School of Medicine many years ago. The tone of the conversation turns vocational.

“Go where you believe God is calling you to go, and you will have a rich life,” said Tigchelaar before launching back into an overview of the tenth cranial nerve and its functions.

For students heading into bright—and very busy—futures, this advice helps to bring things into perspective.

Senior Kelly Edwards is a biology and Spanish double major who has plans to start medical school at Michigan State University just two weeks after Calvin’s May graduation. Edwards, a Grand Lake, Mich., native, hopes to be a doctor and use her Spanish to work with underserved patients.

“This class is a great way to get a head start on my first anatomy classes at med school,” she said.

Kyle Cherney, a senior from Gallup, N.M., agrees with Edwards about the interim course. If accepted into a physical therapy program at Central Michigan University, he would begin a class in clinical neuroanatomy five days before graduating from Calvin.

“I will be very well-prepared for that class!” he said heartily. 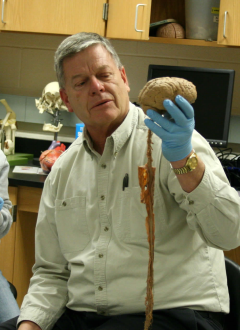 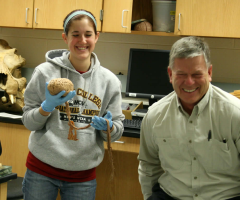 The lighter side of brain science

Read about other interim courses: