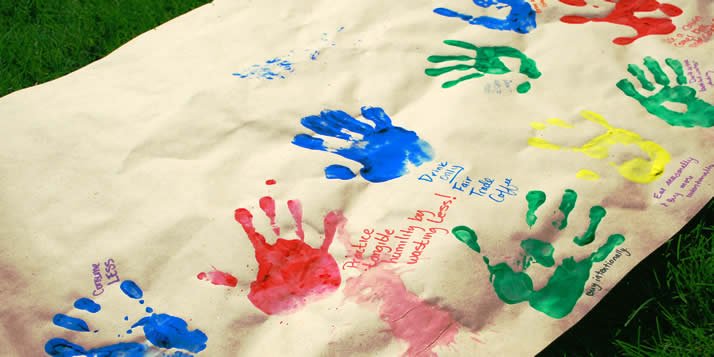 The Social Justice Coalition is urging the Calvin community to become aware of and act on the unjust practice of human slavery through the first annual Human Trafficking Awareness Week.

“Likewise, for those of us who are in position to do something to combat human slavery, however small our contribution, neutrality is a sin.” ~ Inspector General Joseph E. Schmitz, Department of Defense

For the week of Dec. 1-6, the Social Justice Coalition (SJC) is urging the Calvin community to become aware of and act on the unjust practice of human slavery through the first-annual Human Trafficking Awareness Week. The weeklong event will include lectures, films, panel discussions and a fair trade fair.

Over 800,000 people are trafficked every day, including 20,000 people in the United States, explained senior Brittany Van Hal, an SJC member. “As students and future leaders, that is important for us to know.”

Human Trafficking Awareness Week kicked off Monday, Dec. 1, in Johnny’s Café where SJC members talked with students at an information table. Across campus, vendors set up tables in the library lobby to sell their products for the fourth-annual fair trade fair “Presents with Presence."

“Fair trade and human trafficking are related on so many levels,” explained senior and SJC member Isaac Fuchs. “Often, the injustices of the international system of trade have caused poverty to rise in different parts of the world, and the poor are far more likely to be forced into becoming human trafficking victims due to a simple lack of employment alternatives.”

Local organizations sold fair trade items ranging from Christmas ornaments to jewelry and handbags. Women at Risk, a non-profit organization partnering with women and children at risk of human trafficking, also provided products for sale; the items were crafted by women around the world who were rescued from trafficking.

The week will continue with the screening of the documentary “Not for Sale” at 7 p.m. on Tuesday, Dec. 2 in the Commons Lecture Hall. On Wednesday evening, there will be a panel discussion at 7 p.m. in the Commons Lecture Hall. The founder of Women at Risk, Becky McDonald, will deliver the keynote address for the event. The panel, composed of students, alumni and a spokesperson from Stop Child Trafficking Now, will both raise awareness of human trafficking and outline ways students can take action on the issue. A BBC trafficking documentary will be shown in the Meeter Center at 7 p.m. on Thursday, Dec. 4.

The week’s activities will wrap up with a showing of “Call and Response” at Celebration Cinema North (time to be annoucned) about trafficking. Next week Monday, Dec. 8, there will be a benefit Improv show in the Gezon Auditorium at 9 p.m. Guests will be charged $2 at the door, and there will be a container for additional donations. All funds will be donated to a scholarship program for rescued women.

Human Trafficking Awareness Week, though observed in different ways at a couple other universities, is not part of a national or worldwide campaign.

The Calvin event was the brainchild of SJC members, including junior Danielle Sheffield, who has wanted to get the news out about human trafficking since she served an internship with Women at Risk: “I’m hoping to generate interest … stir up passion in people for next year.”

To Van Hal, the week came down to this: “It’s not just information about trafficking, but here is what you can do about it.” 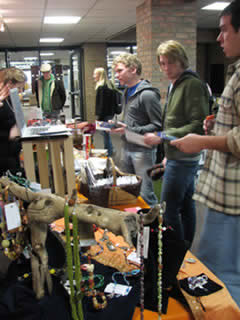 Students at the fair trade fair

Tuesday: “Not for Sale” video, 7 p.m. in the Commons Lecture Hall

Adel Abadeer, a Calvin economics professor, recently published a book—The Entrapment of the Poor into Involuntary Labor—that he hopes will shed new light on the practices of modern-day slavery.