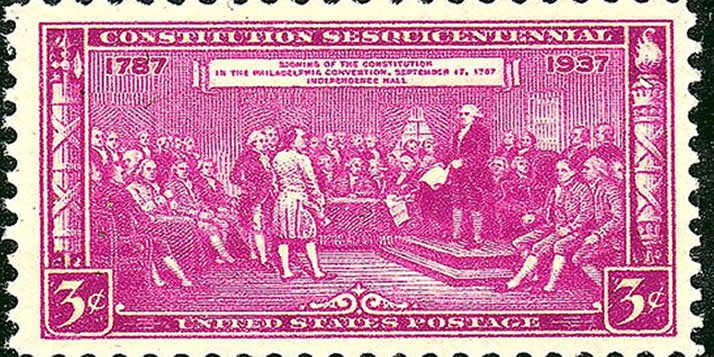 The signing of the Constitution

Most government documents do not have birthdays.

But in 2005, Congress passed a law that made September 17 "Constitution Day.” The law requires that all educational institutions that are supported by the government will acknowledge the day when 39 men signed the Constitution of the United States—September 17, 1787.

On September 17, 2008 Calvin students and faculty gathered to observe the historical day. Student-run organization Democracy Matters and professor of political science Bill Stevenson co-sponsored the event. “Every year we do something interesting,” said Stevenson.

This year’s affair was held in DeVos Forum, where pocket-sized copies of the Constitution were distributed. The mainstay of the hour-long event was a debate that explored the ever-relevant issue of how much experience a presidential candidate must have and whether or not the original Constitution required subsequent amendment. Calvin’s take on Constitution Day was wrapped up with punch and birthday cake with an image of Independence Hall for frosting.

The debate was moderated by professor of political science Stephen Monsma. Professor of history Robert Schoone-Jongen argued in favor of a constitutional requirement for experience, citing Taft and Hoover as classic examples of inexperience and failure in office. Stevenson retorted, smiling, “An experience requirement is wrongheaded, unnecessary, imprudent and counterproductive.”

After Schoone-Jongen and Stevenson exchanged opinions and chuckles, they answered questions from the audience. Monsma then segued into refreshment time: “I say, let the birthday party begin.”

Democracy Matters president, sophomore Emily Daher, commented on the brief celebration: “The Constitution effects us on a daily basis,” she explained. “It is so easy to forget and take everything for granted.”

Stevenson felt similarly: “It’s a healthy calling attention to not only a historically, but, politically important document … that lays out the system which our lives operate on.”