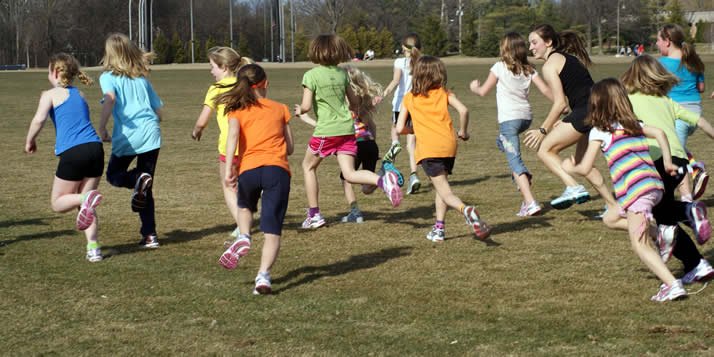 Wide-eyed and pony-tailed, they circle around the net, the bottom of which is set at a height most of them could walk under standing upright. At the moment, however, that’s not a concern for the on-looking crowd of elementary school girls in the Van Noord Arena. Their gaze is fixed at the top of the net, where the six-foot, one-inch Lizzie Kamp just smacked a would-be kill cross-court.

It’s a tutorial on “approach,” volleyball’s designated pattern of steps for attacking at the net, but the day’s lesson isn’t merely tactical: It’s also emotional, nutritional and spiritual. The hop, skip and swing of Kamp’s approach is part of the larger lesson on self-esteem, physical health and faith.

Those themes guide the Calvin volleyball team’s “Girls in Training” program, an initiative designed to get girls thinking holistically about health. Since February, the volleyball team has met with third and fourth-grade girls from local Christian schools twice weekly.

“We play a lot of games, run a lot of laps and at the end of each day we talk about a theme like health,” said Katie Winkle, a nine-year old from Grand Rapids Christian Elementary.

In the first four weeks of the 10-week program, the girls exercised and had discussions at Grand Rapids Christian Elementary School. For the remaining six weeks, the Calvin volleyball squad hosted the girls at Calvin to run on the track, practice in the gym and talk about health issues. The program will culminate with each of its 28 members participating in Calvin’s 5K Fun Run, held in April.

“Girls in Training is about getting girls physically and spiritually fit,” said Amber Warners, head coach of the volleyball team and the brains behind the initiative. Warners specifically emphasized the program’s relational aspect. “Yes, it’s about learning the game of volleyball, but the most important piece is establishing relationships.”

Sixteen of Calvin’s 18 varsity volleyball players have participated in the program thus far. That number includes seniors Erin VanderPlas and Rebecca Kamp, who, though have played their final game for the Knights, still take part in the program.

“They’re really, really nice and always encouraging to us. I like that,” said Winkle before scurrying off to a closing prayer circle.

Rebecca Kamp, who spent last semester student teaching most of the girls at Grand Rapids Christian Elementary, called her reunion with the girls an “automatic connection.” “We get to know the girls really personally,” she said. “And in return, we get to bring a part of our lives into theirs.”

But the younger girls aren’t the program’s only benefactors. Both Warners and VanderPlas stressed the program’s mutually beneficial nature.

“It’s so rewarding for what I’m giving them but also what I’m getting out of it,” said VanderPlas.

Warners concurred: “I think what our team is finding is that they’re being blessed just as much as the girls are,” she said.

She stressed the importance of mentorship among young women. “I would think most of my players can think about a person in their life who has mentored them. Hopefully, we can do that for some of these girls,” she said.

The “Girls in Training” program is part of a movement across Calvin’s kinesiology department to involve athletic teams in service-learning opportunities. Warners has expressed interest in engaging other women’s teams in the initiative. The athletic department has also discussed plans of helping out with the Special Olympics event held annually on campus. 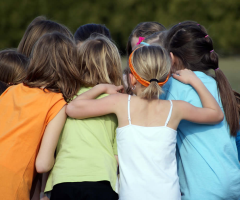 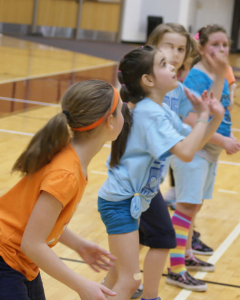 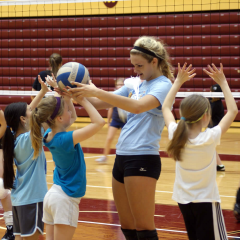 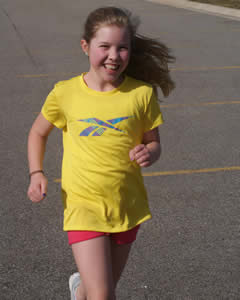