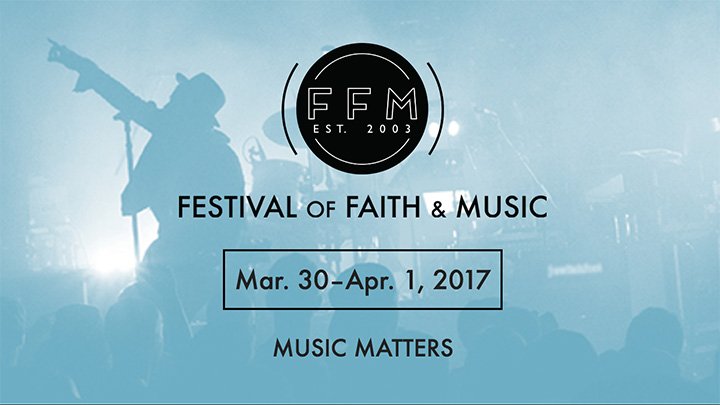 “We want to see where Christ is at work in pop culture. We want to graduate students who are not afraid of the world; who care for and love the world, fully knowing it’s twisted and being ruined by sin and that it’s our fault, but that we can be agents of renewal anyway.”

These are the words of Ken Heffner, the director of student activities at Calvin who has been at this work for more than two decades.

“If Christians care about the renewal of the whole creation, which is a central tenant of Calvin College, and that Christ is making all things new, pop culture matters,” added Heffner.

And with that in mind, Heffner and the student activities office (SAO) is striving to “change the conversation about pop culture”—helping audiences engage contemporary music Christianly. The office does that each year through 20 to 25 concerts. And every two years through its Festival of Faith and Music (FFM). The eighth edition of FFM will take place on Calvin’s campus from March 30 to April 1.

Since its formation in 1993, SAO has provided teaching context for the concerts and movies shown at Calvin. Playbills are offered for each movie and concert as a way of educating and engaging the audience. And with its commencement in 2003, the biennial FFM works to provide this type of education and engagement in one jam-packed weekend.

The FFM, free to registered Calvin students, brings together musicians, critics, journalists, artists, and listeners for three days of discussing and celebrating insightful music that explores, in some significant way, issues of faith.

This year’s performers include Julien Baker, David Bazan and Jamila Woods, with keynote speakers Ann Powers from NPR Music, Jessica Hopper from MTV, and Katelyn Beaty ’06, author of A Woman’s Place. Fifteen workshops will be given throughout the festival, as will academic panels on hip hop, folk, literature and music theory.

Although there is a history of Christians rejecting pop culture, Heffner says Calvin addresses this aspect of culture as a ‘square inch’ of creation that Christ is very much concerned with.

With that in mind, Heffner, who serves as the director of FFM, said that a primary goal of the weekend is for attendees to learn how to become good audience members. He said the reason SAO holds discussions and playbills for each show and movie is because they believe that an audience has a responsibility to actively engage with the art they’re experiencing, instead of passively taking it in.

“If an artist has to bring a whole lot to what they do, wouldn’t it be appropriate to assume that the audience also needs to bring something?” Heffner asked. To Heffner, practical ways of being an audience member that ‘brings something’ to any concert include familiarizing oneself with the artist’s work, coming with a posture of openness toward their work, arriving sober, being loud and quiet at appropriate times, and staying after to ask questions.

A unique opportunity for artists

Heffner says this way of hosting concerts tends to powerfully affect performers, especially those who don’t profess to be Christian. And he says that non-Christian artists are initially skeptical about coming to Calvin, but their mentality usually changes.

“For most non-Christian artists who play here, this is the first and only Christian college they’ll ever play at because the thing these bands dedicate their life to is, for the most part, mocked by Christians,” Heffner explained. “We try to reverse their suspicion by honoring what they’re doing and taking care of them while they’re here, making sure to market them professionally, providing them an adequate crew, and by having conversation pieces with them."

To this treatment, artists are typically very appreciative and recommend Calvin to other artists. “Being taken seriously and having their craft honored and respected, knowing full well that we don’t necessarily agree with everything they do, is a positive experience for [these performers],” Heffner said.

Junior Kendra Larsen, a member of the FFM committee, said the committee began planning for the festival in fall 2016. The board is a fairly diverse group of people: men and women, students and faculty; some from within the Calvin community, some from the greater Grand Rapids area. “Everyone has a connection to FFM and has a passion for why the Festival exists,” Larsen said. “It is that combination of experience and interest, as well as a shared love for the arts and exploring the intersection of faith and music, that helped us curate a more diverse and thoughtful weekend.”

Larsen founded the Student Activities Board (SAB) her first month at Calvin in fall 2014, which includes 20 to 30 volunteer students that meet each Tuesday night to discuss which performers and movies they think should come to Calvin. The SAB also sells band merchandise, provides hospitality and helps band crews with transporting equipment on and off stage. Artists and bands are usually booked three to six months in advance, but the festival performers are booked eight months to a year in advance.

“SAB opened a door for me by creating a safe space to explore the goodness of art that isn't ‘Christian’ by label, encouraging me to ask difficult questions about why I love the things I love,” Larsen said.

“The festival gets us [students] to dialogue with people who may have different opinions or understandings of the world, pop culture, and faith.  I would encourage every Calvin student to attend a concert by a new band or to sit in on a workshop about something you're unfamiliar with,” she added.