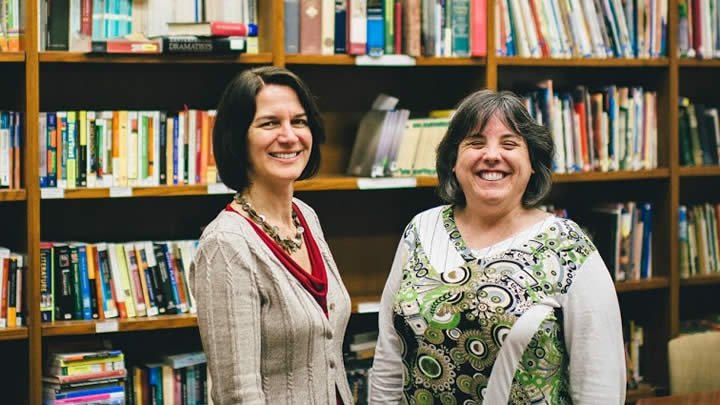 Deb Rienstra and Jennifer Holberg are excited to dig deeper into some familiar classical literature.

English professors Jennifer Holberg and Debra Rienstra will be returning to the classroom this summer, but instead of teaching, they’ll be the students. Holberg will be studying Dante’s Divine Comedy, while Rienstra learns more about Homer’s Odyssey.

Holberg will travel to Florence, Italy for a summer institute on Dante’s Divine Comedy through the National Endowment for the Humanities (NEH). Over the course of four weeks, Holberg and 19 other scholars will engage in intense study of Dante’s Divine Comedy, focusing on Florence as a cultural context for the work. The group will also visit Dante’s stomping grounds in Sienna, Ravenna and Assisi.

“We’ll be going through lots of sites that Dante would have been familiar with, so it will be cool to learn about Dante within that context,” Holberg said.

Applying what she learns

In addition to their cultural studies, the group will discuss ways to approach teaching Dante’s Divine Comedy. Holberg plans to collaborate with the other participants to produce an edition of Pedagogy—a journal of which she is coeditor published through the Duke University Press—focused on that discussion.

Holberg may apply what she learns about Dante and different ways to teach about him by planning an interim in Italy, or teaching students about him in a world literature course as well.

The Odyssey in D.C.

Rienstra will be heading out to Washington D.C. for a weeklong session on Homer’s Odyssey at the Center for Hellenic Studies. Funded by the Mellon Foundation, the weeklong session will give Rienstra the chance to deepen her understanding of a text she has been teaching Calvin students every year since she came to Calvin.

“I calculated that I have taught world literature 15 times since coming to Calvin. Each time, I began the class with The Odyssey,” she explained. “I know as much as I can about [The Odyssey] as a non expert. This is a great opportunity to deepen that understanding.”

Rienstra hopes that she will come away from the conference with some new ideas about how to teach Homer’s Odyssey in addition to a better understanding of the text.

“I’d like to get ideas from leaders and other participants on how they teach Homer and what things their students are interested in,” she said.

Rienstra may use what she learns over her week in D.C. in her research as well. Her own specialty is early British literature and Rienstra sees a number of research possibilities in the connection between that period and the classical authors.

“I’m interested in how Homer was read in the early British period. Classical lit was all the rage at that time. Philip Sidney in particular makes reference to The Odyssey. I’d love to find out what he knew about Homer,” she said.

Although each of the fellowships will involve a heavy workload, Holberg and Rienstra also hope to find time for a little exploring. Rienstra is planning to take full advantage of the museums in Washington D.C., while Holberg can’t wait to take in Italy at a deeper level than most tourists.

“I’ve never been to Italy before,” Holberg said, “So that will be really cool. There’s so much culture and art and history everywhere you turn. I’m excited to be immersed in the city and really have time to see things in a less frantic way. And of course I’m excited about the food.”