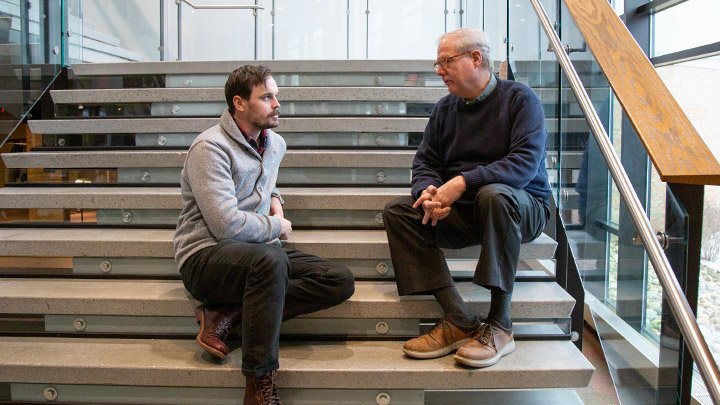 What he does remember … his approved playlist growing up: Contemporary Christian music, the likes of Steven Curtis Chapman and DC Talk.

“I was a music lover, but not allowed to [fully] show it,” recalls Droppers, who is Calvin’s incoming student activities director.

He wasn’t the only music lover in his family. When he was in sixth grade, he discovered his dad’s CD collection of Springsteen, Van Halen, the Beatles, Billy Joel, and Phil Collins.

“I knew he had the nicest sound system in his car, even if he didn’t have the nicest car,” said Droppers. “It [music] was always something he loved and when I sort of came of age, he shared that love with me.”

Around that same time he picked up his mom’s old guitar which she had bought in the 60s at Walmart: “I learned a few chords and said I want to do this, so I walked down to the local  music store and bought a black and red Fender Squier for $99 that came with a free practice amp, and I would play that thing for four hours a day.”

Droppers loved both creating and listening to music. And as he was making the transition from high school to college, he discovered something deeper about those passions.

“There was something else going on within me when I was listening to these bands outside the CCM portfolio, and I can remember a few particular times where it felt like a worshipful moment listening to these artists and they were drawing me toward God, didn’t know how to articulate this other than ‘I want more of this, whatever this is.’”

It was something that never left him. Though Droppers pursued possible interests related to teaching, coaching, political science, and eventually a much deeper dive into ministry—his passion for music kept stirring within him.

Then, in the fall of 2019, an unexpected door opened, a new avenue into ministry.

The director of student activities position at Calvin University, held for nearly 27 years by Ken Heffner, had opened up. Like Droppers, Heffner’s love of music started early on as a kid. For him it started with listening to the Beatles. Heffner’s career path began in the student activities office at a small college in West Virginia. He then took a lengthy detour from this work into the journalism world. In 1987, he got drawn back into student activities work, this time at Wheeling Jesuit University. But, all during this time, he was keeping his eye on Calvin.

“Calvin was an influential school for me, the publications coming out of here, professors from here had a big influence on my own theology and world and life view—even that language is something I learned from here. I was always following what was going on at Calvin,” said Heffner.

And, in 1993, a door opened. Heffner knew that Calvin was the perfect place to engage popular culture boldly and with Christ-centered conviction—something that was at the time, and continues to be quite the exception, rather than the rule.

During Heffner’s tenure, he’s implemented and stewarded an approach to engaging popular culture that parallels the university’s vision for all areas of creation: to come at culture with the idea of “Holy Worldliness” in mind, which seeks to be both holy and worldly simultaneously.

While Christians and the church sometimes shy away from engaging with popular culture, Heffner and Droppers stress that Calvin’s approach to this work is deeply rooted in drawing students toward, rather than away from God.

“The idea of ‘safe’ as a place you go where you are not shaped by other influences of the world – that doesn’t exist,” said Heffner. “C.S. Lewis talks about this in a lot of different books … Safe has to do with ‘who are you rooted in as you are doing all these things?’ – because there’s nothing you can do to get away from these things [like popular culture], but you have to have a true north to do the discernment to sort that out – you have to have the Holy Spirit – having the Holy Spirit within you. Safe here is not a place, but a person.”

“This place [Calvin], when it’s at its best, everything matters. Christ is making all things new, so nothing is off the table,” said Heffner.

The work Heffner has curated for nearly three decades and that Droppers will continue to invite students into is one that creates the space for students to experience excellent artists in premier venues, and to develop the ability to listen to music and view films more attentively, not only to critique the work but also to discover deeper meaning through paying closer attention.

“One thing that Ken and I share is the narrative that art is not simply a distraction from our lives but an invitation to experience our humanity more deeply,” said Droppers. “Perhaps this is why Augustine’s, ‘our heart is restless’ lyric (if I’m allowed to call it that) feels like it belongs in a pop song. Art is regularly inviting us to journey back to our restless heart.”

“When you go on that journey, it transforms you. And that’s what art is supposed to do, it grabs you,” said Heffner. “There is a theological basis for this engagement; we’re not just trying to be cool or hip. This work is rooted in the same gospel that we all pledge our allegiance to. We’re trying to find a new way to bring students to Christ.”