Disc golf: aiming away from the lights 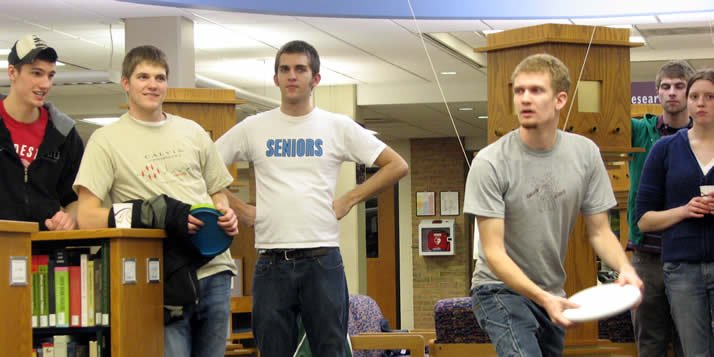 At the annual disc golf tournament, held in the Hekman Library, contestants play a "finesse game."

On the night of March 6, a competitive disc golf tournament was held, featuring 36 teams of two players each. Location of the tournament: the Hekman Library.

The tournament consisted of 18 “holes,” which were indicated by signs that hung by strings from the ceiling. Each hole had two signs: one to establish the tee-off point and one to mark the position of the hole. As with outdoor disc golf, the teams tried to reach the hole in as few strokes as possible.

Glenn Remelts, the director of the library, has been putting on the annual disc golf tournament since 2005: "It is a very different game than outside,” Remelts said. “It is much more of a finesse game, and you’ve got to go around corners a lot. Invariably, you just don’t make it, and you hit one of the shelves, and the Frisbee drops dead.”

Although players did hit shelves with their discs, Remelts did not fear for the safety of the books.

"We have not had any damage, except one sign that hangs down got torn off,” said Remelts, “One thing that keeps the damage down is that a stroke is added if you hit the ceiling or anything suspended from the ceiling. So that keeps people from just whipping it.”

Remelts explained, however, that some lamps were relocated to safer places, and precautions were taken to protect computer monitors.

"The only area that has a lot of protection is the 18th hole (on the library’s second floor),” said Remelts, "There is the research assistant desk there and those two kiosks. That area all through there is what we call a ‘no-fly zone.’ The disc cannot exceed three feet off the ground. If it drifts higher than that, it is an extra stroke.”

Thus, after library closing time at eight o’clock on March 6, the teams began to fill in. Among their number was self-described “Frisbee golf fanatic” Aaron Bardolph, a sophomore from Villa Park, Illinois.

"This particular course, on a scale from one to 10, is a seven-point-eight. There are some very tricky parts, especially the stairwells, and the shelves sometimes get in the way. But the holes are all pretty short, so it is not super difficult,” said Bardolph.

Throwing up the stairs

Remelts said that stairways are the hardest parts of the Hekman course. “Your partner holds the door open and you have to get it through the door. And then the hard part is getting it up the stairs,” Remelts said. "What the novices try to do is they try to whip it. Invariably, they hit something, and the Frisbee comes rolling down sometimes all the way down to the second floor. The people who have done it a couple of years just throw it up to the landing and then up to the next landing.”

Emily Resseguie, a junior from Holland, Mich.,was competing in the tournament for her first time: "If 10 is being difficult, I would rate it a six-point-five," she said. "Because of the stairs, and the book things get in the way, and it is all short shots instead of long drives.” Resseguie explained that hole 16 was the hardest because the golfers had to go down two flights of stairs and then across to the other side of the library.

In the end, the scores were all very close. The two top teams— seniors Laura Hunter, from Fennville, MIch., and Landon Kavlie, from Bismarck, N.D., versus juniors and 2007 champs Greg Clark and Joel Alsum, both from Grand Rapids—finished in 68 strokes and played a sudden-death playoff. The first hole of the playoff ended in a tie with Hunter barely missing the hole with an epic approach. On the second hole, however, Hunter hit a light fixture with her disc. Team Clark and Alsum took advantage and sealed their victory.

"Both years we were kind of surprised,” said Alsum, “Our freshman year we had no idea what to expect, and this year we had some good shots and some bad shots, and it just added up, and we were like ‘Oh, that is a decent score.’”

"We have been in overtime before and so we just wanted to come out with the win again,” said Clark. Yet even though Clark and Alsum finished strong with a win, they still had a hole they wished could be redone.

No hope for a Mulligan

"The one that we got eight on!” said Clark, “I don’t know what number it was but we threw it up the stairs and it came back down, plus someone told us that we hit the ceiling so we had to count that point too.”

"Yeah,” Alsum agreed, “it was disappointing because it hit the ceiling and came all the way back down, one floor below where we were starting from. So we had to go back and try to recycle that attempt.”

The prize was beside the point for Remelts, who also does not wish to make the contestants pay to compete.

It would be too much of a hassle to make people pay. We just want to make it fun,” said Remelts, “It is fun to watch kids have a ball.”