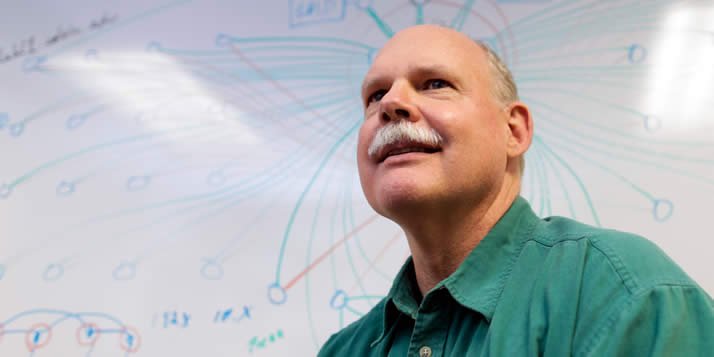 Calvin College computer science department chair Joel Adams is one of just six professors in the world to be recognized as a 2012 Distinguished Educator by the Association for Computing Machinery (ACM).

ACM is the world’s largest computing society, uniting computing educators, researchers and professionals to inspire dialogue, share resources and address the field’s challenges. The ACM Distinguished Member program, initiated in 2006, recognizes those members who have made significant accomplishments or achieved a significant impact on the computing field.

“Joel Adams is an internationally-known expert on computer science education,” said Keith Vander Linden, a colleague of Adams’ in the computer science department. “His contributions to the field range from his well-known texts on introductory computing to his ground-breaking work on introducing parallel computation into the computing curriculum.”

Vander Linden added that Adams is probably best known nationally for being the key instigator of the establishment of national Computer Science Education Week by the U.S. Congress in 2009. (See House Resolution 558, a resolution that passed by a refreshingly non-partisan vote of 405-0.)

"It is a great honor to be named a distinguished member of the ACM, the professional organization for computer scientists,” said Adams. “With computing devices so pervasive in today's world, a person who can develop software can affect multitudes and change the world. Teaching at Calvin has allowed me to impart this knowledge to many bright young people, allowing them to go out and make a difference.”

And Adams has made an impact beyond the Calvin community as well. In 2003, Adams helped pioneer the Imaginary Worlds camps, designed to help prepare middle and high school students for an increasingly digital world. In 2011, Adams and colleague Victor Norman launched TeCreate, a program that introduces middle and high school students to computer programming. And just this past fall, Adams, along with colleagues from Macalester and St. Olaf colleges, landed a $600,000 grant from the National Science Foundation to teach parallel computing—supercomputing—to their computer science colleagues from around the country. Adams says the goal is to train the trainers to ensure that students will have the skills to handle the computers of today and the future.

“Teaching about computing never gets dull, especially seeing the light go on when a difficult concept 'clicks' for a student,” said Adams. “Many of my professional successes have resulted from so-called 'chance' conversations with curious students, so I want to state a sincere 'Thank you!' to those students, and to God for setting up those conversations."

And colleagues of Adams are thankful for his commitment to the Calvin community.

“When I think of Joel, I don't think first of his scholarly abilities—significant as they are—but his friendly disposition and good heart,” said Stan Haan, academic dean at Calvin College. “He's an excellent colleague.  I'm delighted that we have Joel and others like him on our faculty—first rate scholars who have chosen to come to Calvin because of their commitment to Christian higher education.”