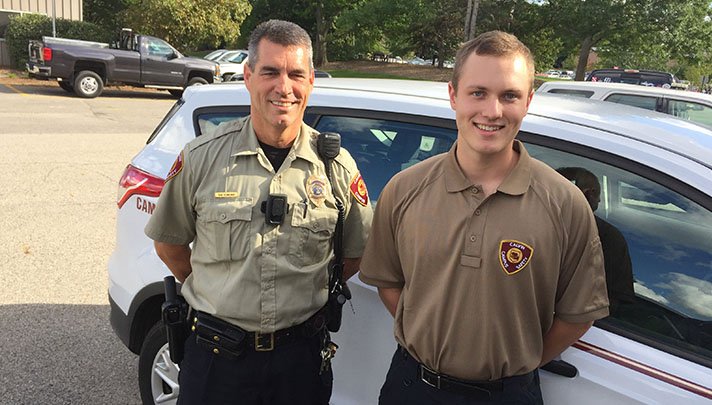 It was a Saturday afternoon in February, and the men’s basketball team was battling Olivet on the court. But, a bigger battle was happening just outside the walls of Van Noord Arena.

Josh Kuperus, then a first-year student, was patrolling campus.

“It was a real quiet day, not much happening,” recalls Kuperus. “As I was driving behind lot 7, I looked to my right and saw a man on the ground in the middle of a parking lot, with bystanders attempting CPR.”

Kuperus radioed dispatch, parked his car and grabbed his AED.

“I was about to strap the pads onto his chest when my supervisor [Ron Venneman] came peeling behind me and took over, telling me to go meet the ambulance at the entrance to campus.”

Campus Safety patrol supervisor Ron Venneman, a 30-year veteran of the sheriff’s department, noticed the man wasn’t breathing and started CPR. With the help of a bystander, they hooked up the AED and delivered a shock. He then continued CPR, shocked him again. The paramedics then showed up, got a pulse and loaded the man into the ambulance.

“The chances of saving someone who goes into cardiac arrest are very low because you have about seven minutes,” said Venneman. “So with this, everything fell into place, we were close, able to get on him right away … I just consider myself one of the instruments God put in place to save this man’s life. Lots of people played a part.”

And Venneman says Kuperus’ assist on the effort was the result of preparation.

“I’m glad our training could have been of use,” said Kuperus. “Calvin has a high save for CPR’s compared to other places, it's so cool to see the training come to fruition.”

Tim O’Connor is a full-time firefighter with the Kentwood Fire Department and is a training center coordinator for the American Heart Association. He also owns HeartBeat LLC, a CPR training company that provides training for Calvin College employees. He says that Calvin is serious about training, and it pays off with saves like this.

“When places do what they need to do, you’ll always have saves like this. When you do it the correct way it always works,” said O’Connor. “Calvin College has always taken my advice, and it shows in the saves they’ve had on this campus. This is not the first save. It’s [CPR training] offered to their employees, anyone can take it. I even have Calvin educators (who’ve taken the class) call me to tell me they’ve saved their own spouses. That’s why I say this is one of many [saves].”

But this save is receiving notable recognition from the American Heart Association. On Tuesday, Sept. 27 at 3 p.m. in the college’s Spoelhof Center Atrium, Ron Venneman and Josh Kuperus were presented with the Heart Saver Hero Award. Jim Haan ’78, who has volunteered with the American Heart Association since 1974 and has spent the past six years supervising 75 CPR instructors as part of his role on the AHA’s Emergency Cardiac Care Committee, says he recalls this being just the second time (since 1974) that this award has been given out in the Grand Rapids area.

“That was my first CPR call with campus safety,” said Kuperus. “I was there within 50 to 60 seconds. You could say that was providence or the Lord’s hand behind that. If it happened later he may have not been saved.” 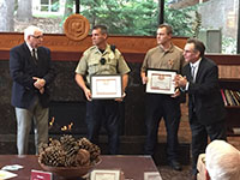 Jim Haan (far right) presents the two officers with their awards and then listens to the remarks from the survivor.

At Tuesday's awards ceremony, the gentleman who survived the heart attack on Calvin's campus recalled God's provision in that moment.