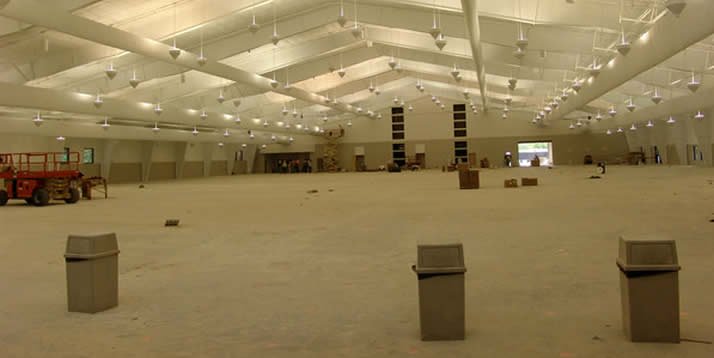 “I think this building will contribute more to changing the recreational culture on campus than any of the other facilities in the complex.”

In late August 2008, Calvin College will open for limited use its new Huizenga Tennis and Track Center, the first completed component of the college’s $50 million re-envisioned athletic facility: the Spoelhof Fieldhouse Complex.

“I think this building will contribute more to changing the recreational culture on campus than any of the other facilities in the complex,” said physical education professor emeritus Glen Van Andel of the $6 million tennis and track venue. “Prior to this, we’ve not had a facility where students can jog and train indoors.”

Van Andel, who retired from the Calvin department of health, physical education, recreation, dance and sport (HPERDS) this past year, leads the committee planning the fieldhouse complex.

Both track and tennis courts will be surfaced with Beynon BSS 1000 Sport Surface, a rubberized material Van Andel described as “totally spike-able.”

“You can walk around the whole surface with spikes—track spikes, not golf spikes,” he amended, “—and you won’t damage it.”

The rubberized surface will be installed in late December or January. Until then, Calvin volleyball and basketball teams will be running, jumping, volleying and shooting on portable basketball floors. The facility will also be used for core classes prior to the installation of the permanent floor.

Two other components of the fieldhouse complex, the Van Noord Arena and Fitness Center and the Venema Aquatic Center, are scheduled to open in the first week of January 2009.

The Huizenga Tennis and Track Center will give Calvin athletes some much-needed square footage in which to hone their skills, Van Andel said. He is enthusiastic about the indoor track, a Calvin first. “If you think of the conditions under which we used to practice in the old days—you just got started running, and you were running into the wall.”

The college’s softball, baseball, lacrosse, tennis and indoor soccer teams will all practice in the Huizenga Center, and the facility will be a big benefit to sports teams that formerly practiced elsewhere. “Tennis starts in January, and, typically, we rent facilities in the area to enable the team to practice,” Van Andel said. “Now they can practice in a campus facility.”

Space for the casual athlete

The center may prove an even bigger boon to the more casual athlete, he added: “It will give us wonderful options for student activities, including intramurals and pickup games.”

The tennis and track facility will also provide Calvin faculty and staff with a place to work out. “There are so many barriers that hinder our exercise routines or ‘Healthy Habits,’” Van Andel said, citing the name of Calvin’s employee health-maintenance program. “The more barriers we can remove, the more opportunities there will be for individuals to exercise. It shows the commitment of Calvin to developing a healthy community.”

Perhaps the greatest advantage of the new facility, Van Andel claimed, is that it gives the Calvin community a place to exercise when the weather turns less than clement. “Running on snow and ice is ridiculous,” he said. “During the long winters, the center will provide a place for students and others to practice their skills without the handicap of bad weather.”

Though the new facility will have multiple uses and benefits, the lead donor on the center, Marian Huizenga, was particularly attracted to one aspect of the project, said senior associate to the president Bob Berkhof.

“The story of bringing together Marian Huizenga and the tennis and track center is a special one,” said Berkhof. “When we were talking to her about contributing to the Campaign for Calvin College, she mentioned that she had met her husband Clarence, who is now deceased, on a tennis court on the old Franklin campus. Because her husband really loved the game of tennis, Marian liked the idea of naming the facility in his honor.”

Grateful to Huizenga and the other donors to the project, Van Andel is expecting the new center to stay busy: “I think it’s going to be used from six in the morning until midnight, six days a week,” he said.

Take a video tour of the Spoelhof Fieldhouse Complex, including the Huizenga Tennis and Track Center

Read more details about the Spoelhof Fieldhouse Complex and see architectural renderings of the finished complex.