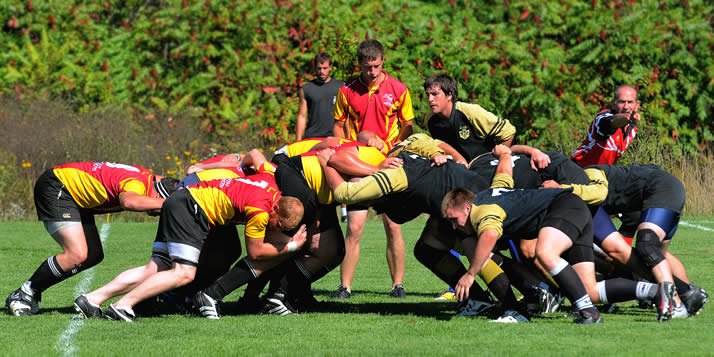 There's an old rugby joke that asks why rugby players don't have mid-life crises. The punchline: they stay stuck in adolescence.

Calvin College senior Michael Bailey likes that joke because it speaks to him of the joy he finds in a sport he took up only a few years back that has captivated him ever since.

“I love it,” he said. “I love the camaraderie both on and off the field. It truly is a brotherhood, and I found very few sports or teams that are like that. I love the action, the movement. And I love the hitting.”

Two years ago Bailey’s love for rugby led him to form a new student organization on campus—the Calvin Rugby Club.

Its mission is well-stated on the club Web site. There the club speaks not only about teaching the basic rules, structure and history of the game, it adds an important final element: “The Calvin Rugby Club intends to reveal a Christian light to the world of rugby.”

That last bit is important to Bailey, whose e-mail signature reads “Scrumming in Him.”

The scrum in rugby is a way to restart the game, usually after a penalty or when the ball has gone out of play. It is marked by the forwards from both teams interlocking and then competing for the ball when it is thrown in their midst.

“It's something pretty unique to rugby—completely different from the way most sports restart play,” said Bailey. “‘Scrumming in Him’ is a way for me to link who I am as a rugby player with who I am as a Christian. One of our goals as a Calvin student org is to be a witness through our play. We want to be people of character on and off the field.”

That's one of the reasons Bailey, who last year served as a Jubilee Fellow, a Calvin program intended to help students think about ministry as a future vocation, is so excited about an April 11 fundraising event the club is organizing on campus.

Calvin will host both Michigan State and Northern Michigan universities for a rugby triangular. The Knights will take on MSU at noon, and MSU will meet NMU at 1:30 p.m. At 3 p.m., Calvin will play NMU.

All games will be held on the fields north of the DeVos Communication Center on campus. Throughout the day the Calvin Rugby Club will hold drawings for prizes donated by local businesses, sell food and drinks and pass around a bucket for donations—all to raise money for the Cook Library Center at the Grandville Avenue Academy of the Arts.

“Some of the guys on the team are involved with the library,” said Bailey, “and they heard that because of budget cuts the library is having a harder time. It's a good resource for our community; they do a lot to help students. So we decided it would be a good cause for us to get behind.”

Bailey said this is the first time the Calvin Rugby Club will try a fundraiser of this nature, but he hopes it won't be the last.

The rugby club got off to a rough start on the field in 2007. Their first match was against Notre Dame in October 2007 and, Bailey said, the final score was not pretty.

“We scored,” he recalled, “which was a victory for us. And we played on one of their intramural fields with the Golden Dome behind us, so that was a highlight. But we ended up losing pretty substantially.”

Indeed the team took its lumps that first year, but began to improve slowly but surely.

“We'd get matches and go to tournaments,” he said, “and teams we'd play would be really supportive, tell us what we needed to do to get better. Both Grand Valley and Central Michigan were great about that. Just the fact that they were willing to play us, even though they beat us pretty handily, says something about those clubs. But afterwards they gave us really good feedback. That's just how the rugby community is.”

Calvin players from all backgrounds

The Calvin Rugby Club now is made up of 25-30 students from a variety of athletic backgrounds.

“We get some football players,” said Bailey, “some soccer players, some wrestlers, a couple of lacrosse players.”

What they have in common, he said, is a strong work ethic.

“We're a pretty blue-collar club,” he said with a smile. “We love to work hard at practice, and we love to have fun and that's what we do.”

The practice is paying off for the team. This spring the club competed in a tournament in Detroit and went 3-0, with wins against Michigan-Dearborn, Oakland and Western Michigan, to capture the tournament title.

“It was pretty exciting,” Bailey said.

Bailey is also excited that next fall Calvin will compete as part of the Michigan Rugby Union, a 14-team conference that includes such state foes as Central Michigan, Ferris State, Grand Valley, Hillsdale, Michigan State, Michigan and more.

“We'll be part of their Division 2, Tier 2,” said Bailey, “but it will be a good test of rugby for us. It will be nice to be part of a conference. It will make scheduling a lot easier, and it will build some healthy rivalries. And we believe it will keep rugby at Calvin for a long time.” 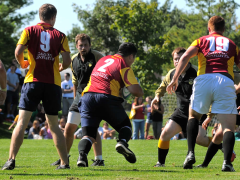 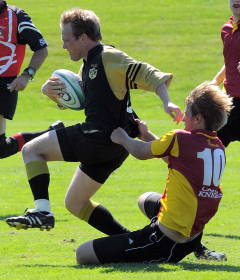