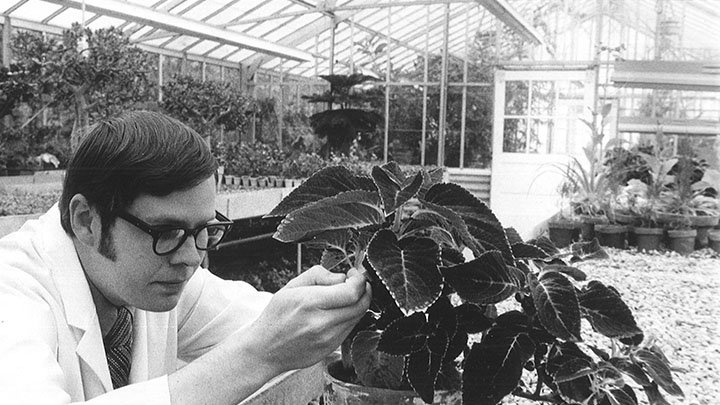 John Beebe's legacy at Calvin College is rooted in his love of plants and his passion for students. Photo courtesy: Heritage Hall

“John was a vigilant protector of the large Shagbark Hickory tree outside DeVries Hall during the time DeVries Hall was being built,” said Dave Warners, professor of biology, one of Beebe’s former colleagues and students. “He made sure there was crime scene tape that surrounded the root zone of the tree so no heavy equipment would compact the soil around the roots (something which is deadly to Shagbarks). More than once he noticed the tape not being taken seriously and he went out to explain things to the construction workers. Today that tree stands as a testimony to his love of the creation.”

Beebe ‘64 developed a love for creation at a young age. His educational pursuits at Calvin College, University of South Dakota, and University of Chicago rooted that love much deeper. And when he returned to Calvin in 1969 to join its teaching faculty, he joined the pioneering work of deepening the study of biology beyond memorization of facts to include more investigative pursuits.

Now, nearly 50 years later, that work has reaped quite a harvest. While caring for trees, plants, and flowers were a love of his—Beebe’s legacy reveals there is a larger set of roots that he watered and nurtured. Roots that are now flourishing.

“I entered John’s plant physiology course in the spring of 1984 deeply disappointed that animal physiology had been full, and more than a little intimidated by Dr. Beebe,” said Warners. “I emerged at the end of the semester convinced I wanted to study plants.”

“Without John Beebe, I would not be where I am today. I have his plant physiology course to thank for beckoning me into the incredible world of plant biology,” said David Koetje, biology professor at Calvin.

But, it wasn’t his extensive knowledge and passion for plants that propelled his students and colleagues into the field of botany. It was his compassion for people, his creating opportunities through research and work study projects, and his gift of inspiring confidence.

“John firmly believed in conducting all his work with an appreciation of the Lordship of Christ,” said Randy Van Dragt, biology professor emeritus. “This guided his love of plants, the quality of his work, his expectations of and appreciation for his students.”

“Graduate school would have never happened for me without John Beebe,” said David Dornbos, professor of biology. “A work study project to determine if the carnivorous Venus flytrap would express nitrate reductase kept me busy for a couple of semesters in his lab. For others as well, it was then that we could experience the joy of doing science, that we could recognize graduate school could even be a possibility.”

“I had never thought about graduate school before one day after lab when he asked me where I was planning to go for my graduate studies,” said Warners. “When I laughed nervously and told him I wasn’t going to grad school, he asked ‘why?’ And I said I wasn’t grad school material. He disagreed with me at that moment and then over time convinced me that I could do graduate school and that I would like it. He offered to write letters of recommendation for me and gave me wise counsel on which programs would be a good fit. This was a huge turning point for me—I honestly don’t know where I would have ended up if John had not influenced me in this way.”

And Beebe’s teaching and mentoring of his students wasn’t contained to the classroom or to his students’ Calvin experience—in fact, many of his former students speak fondly of how Beebe continued to encourage and mentor them well after graduation.

“In the ensuing years John would follow me at every step of my professional development, keeping in touch at annual meetings of the American Society of Plant Biologists and later via email,” said Koetje. “A few years into my work as an assistant professor at SUNY-Fredonia I had hit a low point. Imagine my surprise at that point to receive an out-of-the-blue phone call from John: “What would it take to get you interested in a biology faculty position at Calvin?” A few months later he would be mentoring me in my new position at Calvin. It was a responsibility he never really relinquished until the day of his retirement.”

So, while a tree outside DeVries Hall preserves a part of Beebe’s legacy, his labor continues to bear fruit both at Calvin and through his former students who are leaders in the field of botany. Calvin College provost Claudia Beversluis’ words in her 2007 retirement tribute to Beebe seem to still ring true today.

“I had the opportunity this spring to visit historic Muir Woods and I noted with interest the pattern of trees—a large tree in the middle, surrounded by a ring of outer trees—which will in time have their own rings of trees, and so a forest regenerates and populates. Sometimes the center tree is no longer there, but its influence can still be seen in the surrounding circle. John, you will no longer be present on the teaching faculty—this particular forest. But the circle surrounds you still, and your influence will continue through the expanding growth of botanists around the world.”

Beebe is survived by his wife of 55 years, Thea; his children, Peter (Katie) Beebe and Janna (Joseph) Ortiz; and ten grandchildren. The family is conducting a private service. In lieu of flowers, memorial contributions can be made in John’s honor to the John and Thea Beebe Scholarship Fund at Calvin College (3201 Burton St. SE, Grand Rapids, MI 49546).