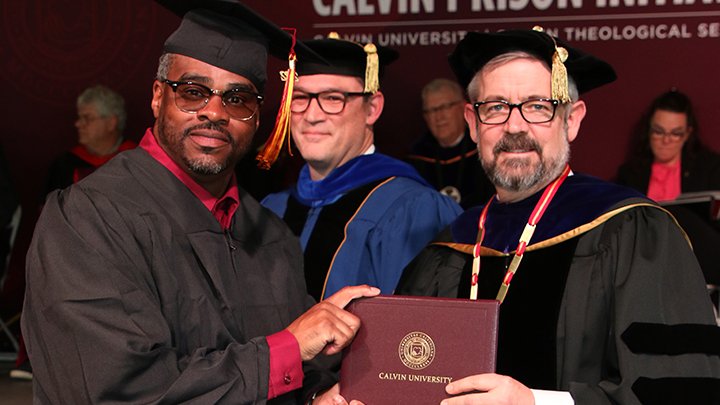 On Monday, May 9, 2022, James Martrice Brown received his bachelor's degree during a ceremony held inside Handlon Correctional Facility.

On Monday, May 9, James Martrice Brown’s name was read in front of hundreds of people. He then was handed his degree by Calvin University provost Noah Toly, shook the hand of Calvin University president Michael Le Roy, and walked back to his seat hearing the applause of his classmates, friends, and even a couple of family members.

On this beautiful day, Brown was participating in a historical moment, the first-ever bachelor’s degree ceremony held inside a Michigan prison.

“We rejoice that two of his family members attended the ceremony, where they could see Martrice in person and celebrate the culmination of five years of study, challenge, and growth,” said Christina Haven, student success specialist for the Calvin Prison Initiative.

Being able to see his family and celebrate with them in-person would hold extra significance for Brown. On May 16, just one week after this momentous event, Brown suffered a stroke. And three days later, on May 19, he died from complications.

“His death has left many people feeling shaken and deeply saddened,” said Brian Noonan, a 2021 graduate of the CPI program. “Trice was only weeks away from a decision he’s been waiting for in the courts that would have likely made it possible for him to leave prison.”

An advocate for prison reform

Brown, 47, had served nearly three decades of his life sentence. And he was keenly aware that new legislation was being considered this summer that would make him a likely candidate to be released.

“While all guys want to get out, he kind of stood out to me in terms of wanting to pave a way that would allow guys doing life sentences to be considered to be released if they were indeed rehabilitated,” said Todd Cioffi, director of the CPI program. “This was a passion of his.”

Cioffi said Brown tracked what was going on in the courts, in politics, and socially. And said “he’d keep me up to date on that. He was an activist in the best sense, but if you didn’t know him that well, you wouldn’t know that about him.”

While Brown was concerned with helping guys get out, he didn’t miss the opportunities to help men flourish where they were currently planted.

“I was a young, hot-headed ball player who always gave him a hard time,” recalls Williams. “I was wild and always into something. Martrice took me under his wing and showed me that I had value, could be anything that I wanted, and I didn’t have to submit to prison life. To me his legacy will be service.”

Brown’s service to others was often under the radar, but definitely didn’t go unnoticed. One of the ways he served students is as a consultant in CPI’s Rhetoric Center.

“My students who worked with him on their writing in the Rhetoric Center loved and admired him because he was smart and selfless,” said Dean Ward, an emeritus professor from Calvin University who taught in the CPI program. “I once was looking at the record sheet for the Center, and I noticed that he had been holding sessions that often lasted two to three hours. I asked why he’d let those sessions go so long, and he said, ‘Well, they had a lot of problems, and I just didn’t want to make them leave.’”

DeAngelo Eady was one of the students who shared with James that he desired to one day become a great writer. “Matrice had all the characteristics of a professor. He was studious and he had the biggest personality that drew people to him. He was someone who would go out of his way to help you.”

It’s because Brown was never done learning himself.

“He loved discussing ideas and sharpening his ability to debate different sides of an argument,” said Noonan.

“He had pride in beating information into himself,” said Mario Collier, a peer in the CPI program. “It was important to balance education with strength for James. The strong man was capable of representing himself in an intelligent fashion.”

Brown will be remembered by his peers in many ways. They describe him as honest, ambitious, loyal, caring, unselfish, determined, direct, strong-willed, complicated, funny, dependable, diligent, patient, stern, and as a hard worker. They say he loved music, basketball, exercising, reading books, and telling jokes.

But what he loved most was his family and the men he walked alongside for decades. The greatest gift he’s left them is hope.

“For the 20-plus years I’ve known Martrice he has always stayed on me about never stop trying to get out of prison and back home to your family,” said Jenero Osborne, a peer in the CPI program.

“As a lifer, James taught me to never give up fighting for my freedom,” said Ahmad Nelson, a peer in the CPI program.

“To rise above this prison and not to continue to have a criminal mentality,” said CPI student Shannon Keys, of a lesson he was taught by Brown.

“A life lesson that Martrice taught me was everyone is not against you, and everyone needs help at some point. Learn how to ask for help and always be willing to help others,” said Williams.

While Brown was a student in the CPI program for five years, he really doubled as a teacher and these lessons he taught will be carried forward through his peers, his friends, “his students.”