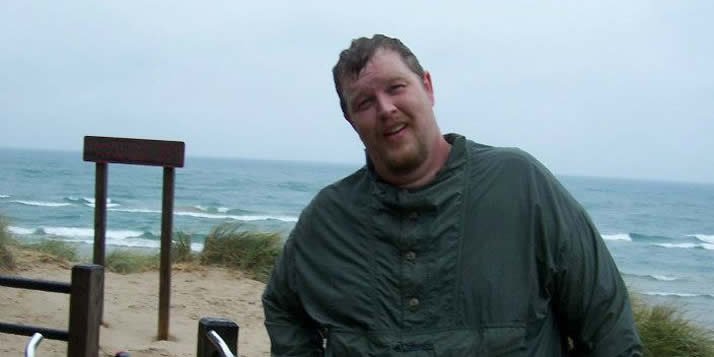 Paul Sytsema is remembered for serving his colleagues all across campus and for his unflagging good humor.

The Calvin community is grieving the loss of colleague Paul Sytsema, who died unexpectedly at 4:30 p.m. on Thursday, November 1. Sytsema, who worked as an administrative assistant in the office of the provost, is remembered as a man who mastered many media to serve his colleagues all across the campus well. He is also remembered as a man of sincere faith and infectious good humor, who deeply loved his wife and two daughters.

A 1996 graduate of Calvin in business and social sciences, Sytsema earned a master’s degree in literary analysis from Michigan State University in 1999. That was also the year he joined Calvin’s office of the provost to support the dean for research and scholarship. Because he combined a depth of institutional knowledge with an understanding of Web technologies, Sytsema eventually broadened his responsibilities to support many of the provost’s communication efforts.

“We would often say, give that assignment to Paul,” said Calvin provost Claudia Beversluis. “He was very versatile in understanding academic issues and technology.”

“He was a walking encyclopedia of the institution,” said Calvin’s Web manager Luke Robinson who sat with Sytsema on the college’s Web team.“He knew where the sources of information were and who owned it and who authored it and how it might be used for making good academic pages.”

“There’s always this one little line in the department assistant’s job description, which is ‘update website,’” said executive assistant to the provost Heidi Rienstra, “but most department assistants don’t know how to do that. Sytsema conducted seminars with the assistants and spent lots of time coaching them one-on-one, she said: “He was a teacher at heart.”

Colleagues from several Calvin offices said that they’ll remember Sytsema for his unflagging sense of humor and optimism.

“He contributed to the levity around the office, around this whole hallway, especially, in the president’s office,” said Beversluis. “At our Christmas parties, it was always Paul who brought the most hilarious gift.”

Sytsema also kicked off Web team meetings with something witty, said Robinson. “He had a way of diffusing the tough problems with humor. He kept things light-hearted.”

In difficult situations Sytsema was always looking for a silver lining, Rienstra said: “He would say, ‘You know, I think we could get around it this way—and that’s a good thing.’”

Over the past year, Sytsema had committed himself to a healthier, more active lifestyle: “We were all very proud of him,” said Beversluis. “He started a series of physical and eating challenges and blogged about it on his Facebook site. He would make a daily challenge to ride to Lake Michigan, and he did it.”

Since Systema’s death, Rienstra has been fielding calls from colleagues across campus, telling her about all of the unrecognized ways that he helped them out. “You know how people always say, ‘There’s a God-shaped hole in everyone?’ Well, I think there is a Paul-shaped hole on this campus, and it’s really big,” she said.

Sytsema used his technological gifts to support the worship at in his home church, Ridgewood Christian Reformed Church, in Jenison. He is survived by his wife Stephanie, a teacher at Grandville Christian School and his daughters Ella and Maggie.