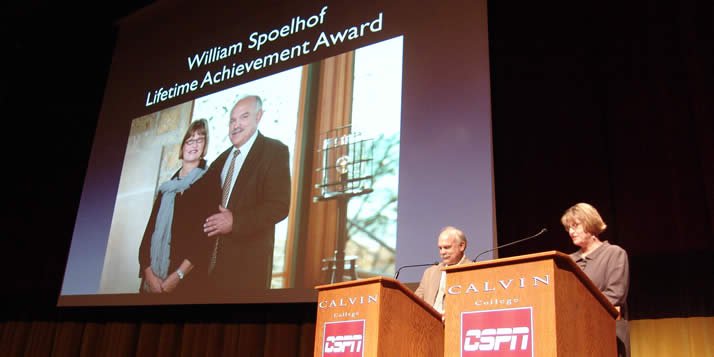 Gaylen and Susan Byker were honored for their 17 years of service to Calvin College.

The William Spoelhof Lifetime Achievement Award was introduced in 2002 as a way to annually honor the Calvin staff member who best exemplifies the qualities of dedication, service and performance that marked former Calvin president William Spoelhof’s lifelong affiliation with the college.

Since then it has been presented by Calvin president Gaylen Byker to a series of 10 recipients, none of whom knew ahead of time that they were being so honored. This year, however, Byker did not do the honors. Instead he was on the other side of the surprise as he and Susan Byker, his wife, were named the 2012 winners of the award, an appropriate capstone to their own 17-year careers at Calvin (Byker announced last summer that the 2011-2012 school year would be his last as president).

The award was made all the more special, said both Bykers, because it is named after a man they considered mentor and friend.
"We have such fond memories of Bill Spoelhof," said Gaylen Byker after he and Susan received the award at the May 31 Calvin Staff Recognition Event on campus. "It's an honor to be associated with him in this way, through this award."

Byker added that during his tenure as president, Spoelhof was a constant source of encouragement and advice.

"He would send notes and letters and old files periodically," Gaylen Byker recalled. "And," Susan Byker added, "I saved them all."

In presenting the award, Calvin director of human resources Todd Hubers noted that Susan Byker was involved in numerous projects big and small at Calvin the past 17 years, including a critical role in Calvin's Youth Writing Festival. A few years after moving into DeWit Manor on campus in 1995, she joined what was then known as the Young Authors Festival handling the organization and coordination of initially 600 first through sixth graders on campus for a Saturday morning.  She continued as the program grew to 1,600 students over two days, including a Middle School Writers Workshop that grew from 400 to 900 children, and a new High School Writers Workshop for 400 students with the events spread over three days instead of one morning!

Meanwhile, Gaylen Byker's legacy includes not only numerous new buildings on campus, but also a multitude of new programs and initiatives designed to expand the college's global vision. During his tenure at Calvin the number of off-campus semester programs grew from three to 14 and the total number of students studying off-campus in either an interim or semester setting has continued to rise.  Since 1995 Calvin has added and expanded the curriculum in such areas as Asian studies, biotechnology, environmental geology, medieval studies, congregational and ministry studies, public health and a new master’s program in speech pathology and audiology.  Expanding faculty and student research possibilities was also a focus for Byker and in 1997 the office of dean of research and scholarship was created to facilitate these efforts.

Through it all the Bykers also served outside the public view. For Gaylen there were committees and meetings to attend; one rough estimate is that in 17 years as president he spent more than 5,000 hours in meetings! But he also mentored students, including every president of the student senate during his tenure. And weekly the Bykers opened their home to share meals with students, faculty and staff.  Because of her teaching experiences at the United Nations International School and in Beirut, Susan mentored and led Bible studies for international students.

Hubers said that the presentation of the 2012 award to Gaylen and Susan is an indication of the gratefulness of the Calvin community to the Bykers for a journey full of long days and nights and lots of hard work. It's the first time, he added, that the award has ever been shared, an exception, he said, that made perfect sense because during their time at Calvin, Gaylen and Susan were truly a team.

Gaylen Byker agreed with Hubers' assessment. In fact, in addressing the staff gathered in the Covenant Fine Arts Center for the annual recognition event, he took the opportunity to encourage the college community to continue to do its work well together as a team, in grateful response to God's grace and goodness.

"I believe Calvin College is the best Christian college in the world," he said, "because of its faculty and staff. Susan and I worked together as a team. Now, we'll miss working side-by-side with you. But you can rest assured that we will have Calvin in our prayers every day."

Then he paused, looked over the assembled staff one last time as Calvin's president and said a final, heartfelt word of thanks to his employees who in turn applauded him and Susan and then rose as one to return his thanks with their own.

Honored with Awards for 25 Years of Service to Calvin

Past Winners of the William Spoelhof Lifetime Achievement Award