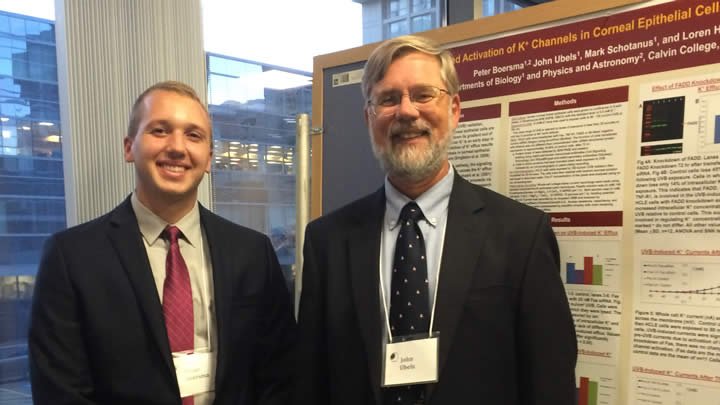 John Ubels, professor of biology at Calvin, is Boersma’s primary mentor on the research project presented at the conference, and he took Boersma to the event.

Ubels said anyone who plans to attend the conference can submit an abstract to present a poster, but there is a review process.

“For Peter’s poster to be accepted as an undergraduate was definitely an honor for him,” Ubels said.

Boersma, who currently holds one of the Beckman Scholars fellowships awarded to biology and chemistry students from Calvin’s Beckman Foundation grant, said he is grateful for the opportunity to present his work.

“To be accepted was just really humbling and an honor,” Boersma said. “I’m thankful that Calvin offers such opportunities for undergraduate students.”

The nature of the research

The research Boersma presented on his poster discusses the effects of ultraviolet light on the cornea. Ubels explained that Boersma’s research appears to indicate that the high potassium levels found in tears protect the cornea from UV in sunlight.

“We’re interested in this because the amount of ultraviolet light that we are exposed to when we go outdoors is capable of damaging our skin in a fairly short time if we aren’t wearing sunscreen,” Ubels said. “But our corneal epithelial cells—the cells on the surface of our eyes—are not damaged in the same way. … So what we’re studying is, ‘What are the protective mechanisms?’”

According to Boersma, potassium leaves the corneal cells when confronted with high levels of UV radiation.

“My part of the research focuses on determining how UV radiation causes an efflux of potassium,” he said. “We know that when UV light is shone on the corneal epithelial cells, they release a lot of potassium starting within a minute or two. But we don’t fully understand the mechanism by which that happens. So my work is trying to elucidate the mechanism by which UV radiation causes the efflux.”

Ubels explained that after disproving the initial hypothesis—that a protein called Fas was interacting with ultraviolet light—Boersma kept on with his research. Based on his reading of the scientific literature, Boersma proposed that a protein in the cell membrane called the TNF alpha receptor is activated by UV, and this became the basis of his proposal for the Beckman Scholarship.

“We think that Peter has in fact identified the TNF alpha receptor as the protein that is activated by ultraviolet and leads to cell death when cells are damaged by ultraviolet,” Ubels said. “Now that we’ve figured that out, we’re going to be able to build a more detailed story of how the high potassium in tears can protect the cornea from the levels of UV to which we are exposed when outdoors.”

A boon to Calvin

Ubels said the fact that Boersma was invited to the conference will enhance Calvin’s reputation in the field of biology.

“It definitely gives us publicity in terms of people being aware of the quality of work that undergraduates at Calvin can do and the quality of work that faculty here can do,” he said. “Having Peter attend there I think will help Calvin students when they apply to medical school and graduate school at institutions that are represented by people attending that meeting.”

The ins and outs of research

Boersma said attending the conference helped him understand more about the research process.

“How a lot of foundational research is translated to clinical practices was a big focus of this conference,” he said. “So people would be doing various research and saying, ‘Now that we’ve found this, we can apply it to the clinical setting to enhance treatments.’”

“It gives me a better idea of how I could engage in research that would be able to be translated to clinical settings,” he said. 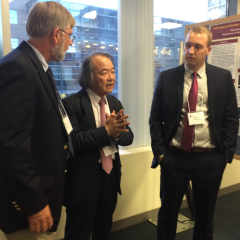