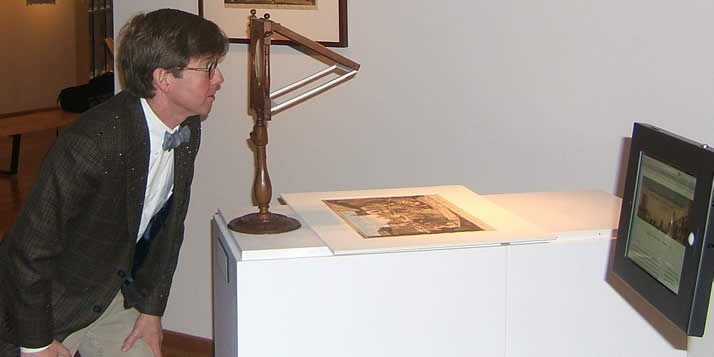 Craig Hanson views a print from the "Prodigal Story For The Marketplace" exhibition through the zograscope.

An art exhibition without art sounds like a contradiction in terms. Visitors to Calvin’s Center Art Gallery’s Prodigal Story For The Marketplace art exhibition (Nov. 1 - Dec. 17) will see several wall-hung portraits that were never intended to be art.

“It’s a strange show because it’s not an unusual expectation to walk into an art gallery and expect to see art,” said Craig Hanson, professor of art history at Calvin College, “and the first thing to understand about this show when you walk in, is in the 18th century, this was not art. This was the 18th century viewmaster.”

Hanson is co-curating the exhibition with Paula Manni ‘13, who graduated from Calvin with a degree in art history. Manni, who is currently working as an intern in the department of contemporary art at the Detroit Institute of the Arts, helped curate the exhibition along with Hanson and Joel Zwart, director of exhibitions.

It wasn’t until halfway through her sophomore year that Manni declared her major. After going on a Venice interim trip led by Hanson, she decided to major in art history.

Unbeknownst to her at the time, Manni’s visit to Venice had a connection to the prints in the Prodigal Son exhibition. The Remondini publishing firm, which published the six prints in the exhibition, was based in Bassano, Italy, which is 45 miles northwest of Venice.

For the past year, Manni has collaborated with Hanson in organizing the Prodigal Story For The Marketplace exhibition. To prepare for the exhibition, Manni worked extensively with Hanson as part of an independent project for the 2013 spring semester. The curating process involved gathering information, research and deciding what artwork to display.

“Craig is an amazing researcher,” Manni said. “Working on the project with him really honed my research skills.”

The project was well-suited for collaborating with a student, Hanson said.

“It’s been an exciting project because it really was perfect to do with a student,” he said. “The scope of it was limited, it was targeted. Paula has been fantastic at every stage. It was really exciting to use the Center Art Gallery as an extension of a teaching space.”

Immediately before Hanson’s lecture on Nov. 21, Manni will lead a walkthrough of the gallery, answering questions, talking about the Prodigal Son prints and giving visitors a visual of what Hanson will talk about.

The six prints in the exhibition were designed in the 18th century to be viewed through a zograscope, an optical lens that functions like an antique viewmaster.

“[These prints] would be placed in a viewing device,” Zwart explained, “and if you were well to do, perhaps you owned one of these, and then you had these folios of print so that at a party you could have people over and you could let them look at it, or there was somebody on the street who had these and people could pay them a certain amount of money to look at these images. So it was a form of entertainment.”

Hanson, Manni and Zwart wanted to produce an online catalogue for the art exhibition, which is a more cost-efficient and wide-ranging medium than the traditional print catalogues often used for art exhibitions, Zwart said.

The catalogue’s online element has widened the scope of the exhibition beyond Grand Rapids. After a week of being published online, a museum in Cambridge, England found the exhibition’s online catalogue and is now sorting through its collection of perspective prints, which includes print sheets from Remondini’s Prodigal Son series.

Next to the antiquated optical device is an iPad which allows visitors to read about the prints via the exhibition’s online catalogue. Zwart worked with Calvin Information Technology to purchase two iPads which will be used for the art gallery.

“We have this interesting dichotomy of technology,” Zwart said. “You have this very antiquated viewing device that when we look through we think this is kind of interesting, but back then people were like, that was a great form of entertainment. Most people didn’t know what Paris or London Bridge looked like. This was really their only opportunity to see it. And then next to it [zograscope] we have this iPad mounted which is our current technology.”

The art in the exhibition was discovered by Betty Sanderson, the administrative assistant for the art department, who was organizing and inventorying Calvin’s art collection when the art gallery was moved from the art department to the Covenant Fine Arts Center. The six prints were donated to Calvin in the 1980s, but the donors’ names are unknown.

“It was a very great find within the collection because it fit in with this newly established collection of prodigal son artwork [from the 2009 exhibition],” Zwart said.

The exhibition contains six copied images, printed by the Remondini firm ca. 1784, depicting the biblical account of the Prodigal Son. One of the original images—The Prodigal Son among the Harlots, the third scene in a series of six, created ca. 1770 by artist Georg Balthasar Probst (1732–1801)—is on display in the gallery next to the six printed copies from Remondini. A lack of copyright laws enabled the Italian printing firm, Remondini, to steal Probst’s artwork and reprint them for profit.

“I think [the prints] become much more interesting once they don’t have this expectation of art,” Hanson said. “Then you can look and realize there was this rich visual culture in the 18th century.”

Hanson anticipates that the exhibition will teach visitors about the long history of visual art that accounts for modern-day innovations.

“Above all I hope that we have a greater appreciation for a proliferation of print culture happening in the 18th century as opposed to the 19th or 20th or even 21st century,” Hanson said. “What we’re living out in terms of google image and instagram is actually a part of a process that’s 250 years old now.”

In addition to the six prints from the Remondini firm, the Prodigal Story For The Marketplace art gallery includes other original artwork by Probst (God Created Man in the Garden of Eden), 18th century books published by the Remondini firm, View of the Church of Santa Costanza in Rome, ca. 1770, by Jacques Chéreau, and a 19th century zograscope to view the Prodigal Son prints. 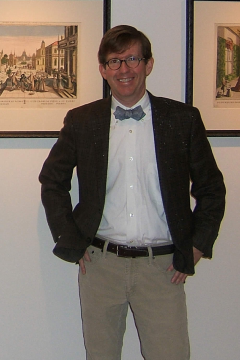 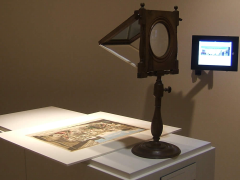