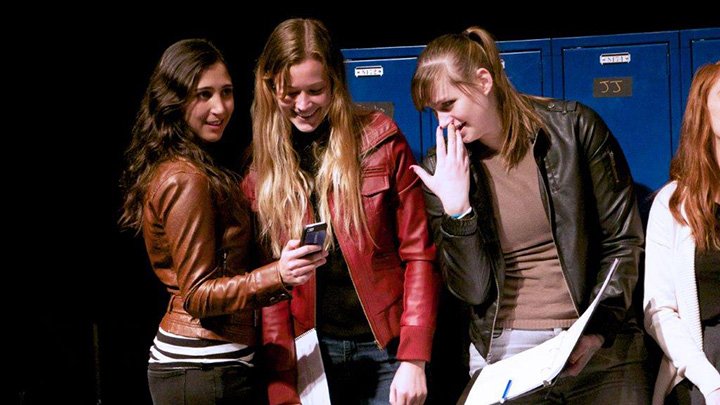 "You Make a Difference: No More Bullying!" is being presented at Calvin on Sept. 22-24.

“Theater is about what it means to be human in a broken world,” said Debra Freeberg, Calvin communication arts and sciences professor. “It disarms our prejudice; we feel empathy for the characters. It does it in a way that lectures just don’t do it.”

Freeberg’s latest production You Make a Difference: No more Bullying! is an example of the way in which theater has such a clear impact. Freeberg was compelled to contribute to the dialogue on this social issue after her daughter’s experience of being bullied.

“I just saw the damage it does,” she said. “I saw a need and really felt a passion for it.”

Freeberg spent several years researching the issue. “I found that what adults think really doesn’t work for kids,” she said. “Saying, ‘just ignore it,’” doesn’t work. What kids need is someone to come alongside and say, ‘that was really mean,’ or ‘I’m sorry you were treated that way.’ I tried to highlight things that kids said were effective.”

The result is a one-hour musical following the story of Sticks, Pellagia and Diamond, who are bullied at school. Through song and short scenes the production shows the effects of bullying behavior and how bystanders and friends can make a difference through acts of kindness and standing up for one another.

The one-hour musical, written and directed by Freeberg with music by Tricia Bayfield ’05, takes the stage Sept. 22-24 once again (it debuted in January as a workshop production). Special school performances are available. All performances are followed by an audience discussion.

During the January performances, the audience discussion was profound. “It allowed students to know that they’re not alone,” said Freeberg. “At times it was heartbreaking. One student said, ‘I get bullied every day. No one likes me.’ For a young kid to have the bravery to say that was incredible.

“Another student said, ‘My best friend gets bullied. What can I do about it?’ Bystanders are affected by it, too,” Freeberg said.

While the play doesn’t offer easy answers for the characters or the audience, it does offer some hope.

“It’s easy to patronize kids, where everything resolves so sweetly in the end, but that’s not very realistic,” said Freeberg. “I wanted to offer kids some means of becoming more resilient. I wanted to point to a better future.”

The original production drew attention from the International Bullying Prevention Association (IBPA). “I had the pleasure of attending the performance,” said Lynn Lonsway, chief operating officer of IBPA. “For a play to be written based on evidence-based practices in the bullying prevention field is truly a gift to all students that attend as they are gaining valuable information that will help to change school climate.”

In fact, the troupe has been asked to perform at the IBPA national conference in New Orleans this fall.