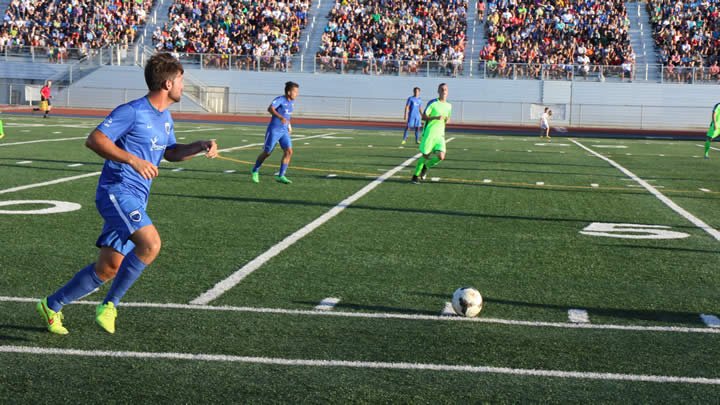 A.J. Dufendach remembers the chills he felt while playing in front of more than 2,000 fans at a Calvin-Hope men's soccer game with the MIAA championship on the line. For years, Dufendach wondered if he would ever feel that same excitement on the soccer pitch again.

This summer, Dufendach along with two other Calvin alumni men's soccer players were able to feel that same excitement and more while playing as members of the newly-formed minor league Grand Rapids Football Club (Grand Rapids FC).

Founded in 2014, Grand Rapids FC kicked off its inaugural season this summer as a member of the Great Lakes Premier League. The new club plays its home games at legendary Houseman Field - an 8,000 seat facility just east of downtown Grand Rapids.

Composed of former and current collegiate players spanning all divisions, Grand Rapids FC became an instant hit, drawing nearly 2,500 fans to its home debut in May and reaching a crescendo of more than 6,500 fans at its finale in late July. The fan surge was spearheaded by a fan base dubbed "The Grand Army" that marches through the streets of midtown Grand Rapids before every game and into the stadium with noisemakers, flags and banners.

"It was incredible," said the 29-year old Dufendach of the first-year experience. "After I was done playing at Calvin, I had participated in some smaller leagues and tournaments but I thought that the days of playing in front of a big crowd were over. Just listening to the crowd fill into the stadium before every home game gave me chills. It was something I had not experienced since playing in a Calvin-Hope game years ago. To have it all happen in my hometown was unbelievable."

Building on past success

A native of Grand Rapids and a graduate of nearby Forest Hills Northern High School, Dufendach is joined by fellow Calvin grads Nick Capisciolto and Sean Broekhuizen on the Grand Rapids FC roster. Dufendach and Capisciolto were members of Calvin's MIAA championship teams in 2003 and 2004 and played on a pair of teams that reached the NCAA III Tournament, including a 2005 team that reached the Sweet 16 round.  Broekhuizen graduated from Calvin this past spring and was a member of a Calvin team that reached the NCAA III Championship final in 2011 as a freshman. He was named a Division III All-American this past fall after leading the Knights to an MIAA title and to the second round of the NCAA III Tournament.

Together, despite their differences in age and experience, the Calvin trio had a unique and memorable time.

"For me it was extremely exciting because it gave me the chance to keep playing soccer at a high level in the city I grew up in," said Broekhuizen, who moved into a starting role on defense midway through the season. "I think it was even more meaningful to the older guys on the team though. I could see it in their eyes. They had been waiting for years to play on a team like this in their own city."

Dufendach agreed. "It was definitely a dream come true for me," he said. "I mean, at my current age, this is as high of a level of soccer that I'm going to get and I'm just grateful to have this opportunity."

For the 31-year old Capisciolto, his year with Grand Rapids FC was also one for the history books. "I just wanted to be a part of this first season," said Capisciolto, who previously played with the West Michigan Edge of the USL Development League in 2007 and 2008. "When I was playing with the West Michigan Edge and some of the other local club teams, we might have 400 fans show up for our games. I had a feeling that the fan following for this club would be much bigger and that turned out to be right."

According to Capisciolto, the current generation of fans are more attuned to soccer, particularly in West Michigan. "The timing was just right," said Capisciolto. "I'm part of a generation that grew up playing soccer more than any other sport and now young families are continuing that same trend. Fans want to watch soccer in person and Grand Rapids was ready for a team like Grand Rapids FC to support."

Dufendach, Broekhuizen and Capisciolto all noted the strong marketing efforts of lead owner Matt Roberts. "Matt did a fantastic job of marketing the club," said Dufendach. "He got the word out quickly and knew how to reach the fans through social media and other avenues of communication."

Inspiring the next generation

The large home crowds included a family atmosphere with young soccer players coming to games with their parents. Dufendach and Capisciolto have both been involved as coaches of youth club programs since their Calvin playing careers ended. Dufendach recently concluded his first year as as the head coach of the East Grand Rapids High school boys varsity soccer team while Capisciolto served as his lead assistant.

"I was one of several players on the team that have coached club or high school soccer in West Michigan and that was part of the local draw," said Capisciolto who shares the Calvin single-season record for assists (17). "Young players wanted to come out and watch their own coaches play and see how they could perform on the field. It was fun for them and it was fun for us too."

Grand Rapids FC finished in second place in the five-team Great Lakes Premier League posting a 3-3-2 record in league play and 5-4-3 overall. The league has plans to expand in 2016 with the possibility of up to 12 teams and two divisions. Grand Rapids FC was led in its inaugural season by head coach George Moni who played professionally in Albania and currently serves as the technical director for the Grand Rapids Crew Juniors club program.

"The training we received under George was fantastic," said Dufendach. "We did the same training sessions that big clubs like FC Barcelona use. I said to Nick on more than one occasion, this is stuff we have to take with us this fall when we coach our high school team. I felt like we should have been paying to learn these training techniques. It definitely helped us as players this summer but it will help us even more as coaches down the road." 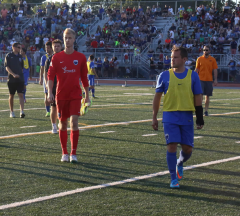 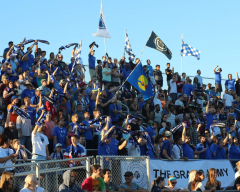 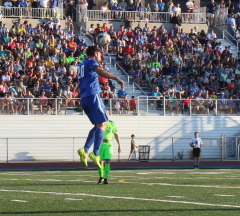 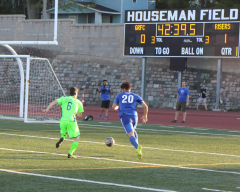 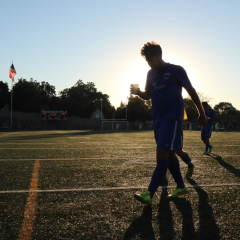 One lasting memory from the season for all three players was the chance to represent Calvin College while playing for a minor league team in its first year of existence. "I think there were two games this year when all three of us (Calvin alumni) were on the field together at the same time," said Capisciolto. "When you look at all of the Division I talent that was on this roster, that says a lot about the level of soccer that we have at Calvin College. We stood toe-to-toe with Division I players and with a guy like Sean, he really stood out and showed how good of a player he really is."

Dufendach agreed. "At the local club level, there is always a lot of talk about going Divison I and seeing how high you can play," he said. "At Calvin, you know there will be a strong focus on academics but the level of soccer is also high quality. When you have three guys from the same Division III school playing with the big boys, it says a lot."

Broekhuizen was happy to get to know both Dufendach and Capisciolto. "I didn't play with either A.J. or Nick because they are a little older than me but I really enjoyed getting to know them as teammates," he said. "There's definitely a bond between us as Calvin Knights."