After graduation, the road less traveled 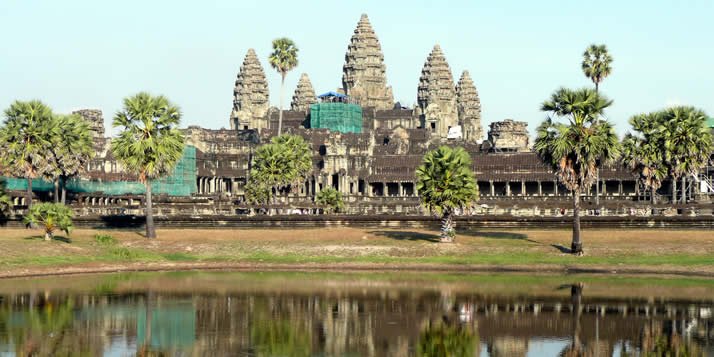 Jon Cooper was one of the many employment-seeking engineering seniors who received job offers before graduation this spring.

“I focused on trying to get a job, doing the expected route,” Cooper said. “In the back of my mind was this place on the other side of the world that was calling after me.”

The other side of the world Cooper was referring to—Cambodia. Cooper went on Calvin’s 2008 January interim, “Transforming Cambodia,” led by Calvin engineering professor Leonard DeRooy and Calvin biology professor David Dornbos. The pair shepherded students around Cambodia and Thailand, working closely with students from Handong Global University in South Korea.

But this was not first time Cooper was exposed to a Cambodian university. For his engineering senior design project, he collaborated with fellow civil and environmental engineering seniors Mike Vance, Aaron Van Proyen and Mark Volle to design an agricultural research center for the budding Bethany International University in Siem Reap, Cambodia. The team was hopeful that their design would be implemented by the university.

While the land deal fell through when Cooper and his peers were visiting the proposed construction site, he did not soon forget about the research center. “While I was there I saw a lot of hope and potential,” Cooper explained.

After he returned from Cambodia and Thailand, Cooper wrestled with his post-graduation plans. “Going into my last semester I had my plan for how my life was going to look after college,” he said. “And God had a completely different plan.” One course was to accept a job offer, but Cooper felt unsettled. “Despite the offers, I felt I needed to serve in Cambodia.”

Cooper’s inner stirrings became a real possibility after teaming up with Partners Worldwide, a faith-based, non-profit which creates avenues to eliminate poverty. He journeyed to South Korea on July 6 to attend an international human rights conference, and from there he will settle into rural areas of Siem Reap for at least one year of service.

The road to self-sufficiency

There, Cooper will help facilitate construction of the agricultural research center (the original plot of land was reclaimed). “I think the school will be a huge leap for them to be self-sustaining,” he said of the impoverished Cambodian farmers. “They will hopefully be less dependent on volunteers and government organizations because they are making enough of a living farming and selling cash crops.”

Though Cooper expects to be surprised along the way, he said, “I feel a great deal of confidence in my engineering background.” When his wits fall short, he will be conferring with his Calvin adviser, professor De Rooy, for professional support.

De Rooy is confident in Cooper’s abilities: “I think that Jon is a good candidate for this type of service because he has the type of personality that makes one feel at ease,” he said. “He is easy to talk to, and I think will make a good facilitator in Cambodia,” he said.

Sacrificing snowfall and one year

Originally from Kalamazoo, Mich., Cooper anticipates missing his family, a white Christmas and camping trips up north. But he also anticipates that his experience in Cambodia will be marked by service. “I expect to be surprised by the hospitality,” he said. “I am going there to serve; instead, they will serve me in a sense, by showing me true hospitality and generosity.”

Cooper realizes the effect of his cross-cultural commitment. “I expect to come back and start living, but with the added benefit of having lived serving the people in Cambodia,” he said.

In the meantime, Cooper is putting his future plans on hold, “I’ve been pretty fortunate,” he remarked. “I’ve had a lot of opportunities in my 21 years. I can take a year off and give back to people who are living in poverty.”