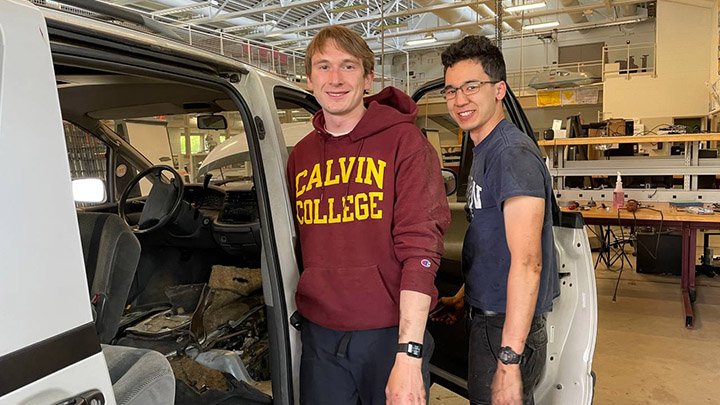 ‘Creates entire PPT to tell a joke; inadvertently mutes himself; talks about dentist; uses sound effects; tells about when he was at Calvin.’

These phrases all show up on the Prof. Fred Haan Bingo card created by 2020 grad Bridget Pertzsch during her final semester at Calvin.

“These are some of the things that come up repeatedly, especially having so many classes with Fred,” said Pertzsch of her selection of items for the card.

But, there’s one square on that Bingo card that seems to rise to a whole other level.

“I must’ve made reference to the Previa more than I thought,” said a smiling Fred Haan, a professor of engineering at Calvin.

The Previa is his 1993 minivan, which he’s owned for two decades. During spring 2020, when the pandemic forced Calvin to go online for the final two months of the semester, Haan began “Fred Haan history moments,” a short segment during class where he would show a slice of his life as a way to keep students engaged during the period of remote learning. This moment provided a soft launch for the Previa.

“It started with a casual mention [of the Previa], but it came up again, and we latched onto it,” said Lillie Spackman, a 2020 engineering grad. “As soon as he knew we were having fun, it was an upward spiral of chaotic fun.”

Students in his class made a fake Wikipedia page at the end of their senior year, with stories and comments, which included many references to the Previa, its importance, and where it was projected to be in a few years.

“One time when I logged onto class, the rest of the class was already there,” said Haan. “Bridget shared her screen; she found a Previa commercial from 1991 and it was playing while I logged in. It said something like: ‘the Previa, the new standard by which all minivans would be judged.’”

And the fun didn’t stop with his classes in 2020. Professor Haan continued his “Fred Haan history moments” during in-person classes the following year, with photos of the Previa frequently making an appearance.

“I do think that learning benefits when there’s a relationship. There’s a comfort level people need in order to ask questions, to admit they don’t know something, so I wanted people to be comfortable enough to do that,” said Haan. “So, some of the things I do to achieve that, I show myself, things I did this weekend, things I did this summer, me with the kids, things that show I’m a real person. So, adding a few light-hearted things is a way to try and connect a little bit more.”

The Previa was one of those things. But sadly, its time seemed to be running short.

A time of mourning

In December, I got the news that the head gasket had blown,” said Pertzsch. “I thought it was time for the Previa to be put to rest.”

So Pertzsch searched for a sympathy card that would express her feelings. Not finding any that were “automobile-specific” at the stores she went to, she made her own, and Spackman and her sent it to Professor Haan.

“When I took the class it [the Previa] was broken and every time he would use it as an example, he would mourn the loss of the van, because I think it was probably the first minivan they [Haan and his wife] bought as a couple and they had a lot of shared memories in the car and it was so special to him,” said 2021 engineering grad Martin Grimley.

No doubt the Previa was special to Haan, but his students had been endeared to the minivan as well, perhaps more so to its owner … their professor.

An act of love

In spring 2021, this prompted two of his students to act.

“Professor Haan is really wonderful and you could tell the car meant a lot to him and I thought it would be a fun challenge,” said Grimley.

“Tim and Martin said ‘we can’t let that thing die, no way we can do that, can we work on it?’” said Haan.

Haan obliged. The students ordered the parts, and on Friday, May 14, the van went in for emergency surgery.

“They broke it apart on Friday, the parts came on Monday and by Tuesday night as I was planning to go to Honors Convocation, they emailed me: ‘it’s all ready,’” recalls Haan.

A van, community lives on

“I was out in Michigan for Commencement and one of my classmates said, ‘the Previa is alive again,’ I was shocked,” said Pertzsch. “I thought ‘I prematurely sent a sympathy card.’ My understanding was it’s a complete goner.”

But it wasn’t. The Previa lives on. And so too does the community that was formed by not only a handful of silly references to a minivan, but by the investment in relationship by a professor and his students.

“Fred’s one of those people who is really good at being present and meeting you where you are at and also inviting you to meet him where he’s at too,” said Spackman. “It was a relief to be done, but our sadness in ending in 2020 was in many ways a testament to how strong those relationships are and how well he did, how well Calvin did in general, at cultivating those relationships. It’s not a Fred-only thing, he just did it especially well.

“The Previa rides again and we are delighted to know that. Perhaps it symbolizes our recovery from a chaotic pandemic. The fun and nonsense helped us make it through.”