A $25,000 grant helps stroke survivors reclaim their voice in the church 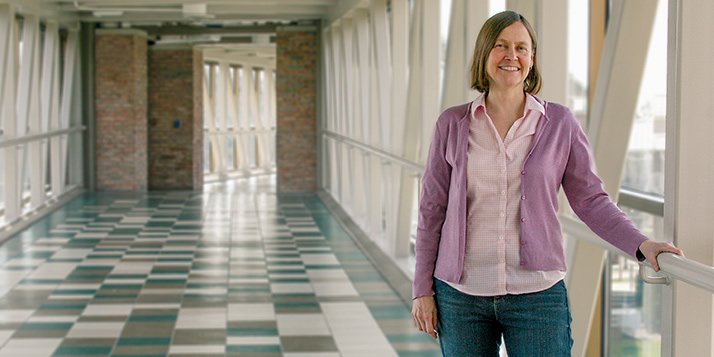 Peggy Goetz is studying how people with communications disorders re-integrate into their churches.

After a stroke, a person often has a difficult time re-integrating back into the life of her or his church—especially a stroke survivor who suffers from a communication disorder. The experience of survivors often follows a familiar pattern, said Peggy Goetz, a communication arts and sciences professor who has researched stroke survivors. During the initial crisis, and in its immediate wake, stroke survivors are often well supported by their church communities with visits, meals, even day-to-day care. Once they begin adjusting to life beyond the hospital and rehab, however, the attention they get from their church families goes on the decline. Those stroke survivors who struggle to get the words out also struggle significantly when their friends begin talking to them mainly through their spouses. Sometimes, because they can’t speak easily, they lose their friends. And typically, they aren't chosen to serve as ushers, speakers, servers of communion.

“If you think of church ... it’s constantly about communication in so many ways,” Goetz said. “If you have a communication disorder, it’s harder to advocate for yourself." Two themes commonly emerge for survivors with communication disorders in church, she said: isolation and lack of purpose: “Many stroke survivors talk about the role that communication problems play in frustrating true community and relationship; they also struggle with questions of why they have been allowed to survive and what this survival means in regard to their purpose in this new life.”

Goetz recently landed a $25,000 Louisville Institute Project Grant for Researchers to fund an ethnographic study of how stroke survivors with communication disorders experience Christian communities. Along with her student researchers, she will interview and attend church with the survivors. They will also interview the close friends and caregivers of survivors.

As a culmination of the project, they will host a special worship retreat. “I hope to have that service led and planned by stroke survivors,” Goetz said. “And I’m hoping it will be a more visceral, musical church service where people with a variety of different communication disorders can participate.”

Goetz’ project is rooted in the evolving academic field called “disability studies.” It’s an interdisciplinary field created by people who are pushing against the medical model of disability. She defined that model this way: “People assume that someone in a wheelchair wants to walk again, someone who is deaf wants to hear again, somebody who is autistic wants to be non-autistic. They want to be ‘normal,’ if you want to put the word normal in quotes.”

Rather than fitting the accepted idea of normal, she said, many people with disabilities—people with communication disorders included—would like to have society changed in various ways to give them access. “Peggy’s project gives people who have significant communication issues post-stroke a voice to express important church-inclusion issues near and dear to their hearts,” said Judith Vander Woude, the director of Calvin’s speech pathology and audiology program. “The work Peggy is doing is cutting-edge in disability studies.”

Goetz is not trying to paint a negative portrait of the church, particularly the Christian Reformed and Reformed churches, both of which, she said, are exploring how to be more inclusive to people from the whole spectrum of disability. “Usually, people with strokes will be very appreciative of their church,” she said.

And more than one of the stories she has heard in her research with stroke survivors has been inspiring. One of them came from a man who, after his stroke, dedicated himself to prayer: “The people would call him from all over the congregation, and he would write their prayer requests down, and he would really pray in a dedicated way for people, and he had notebooks full of whether this or that prayer were answered or not,” Goetz said. “And he had very little speech. Just a few words.”

Mapping: a creative path for all students