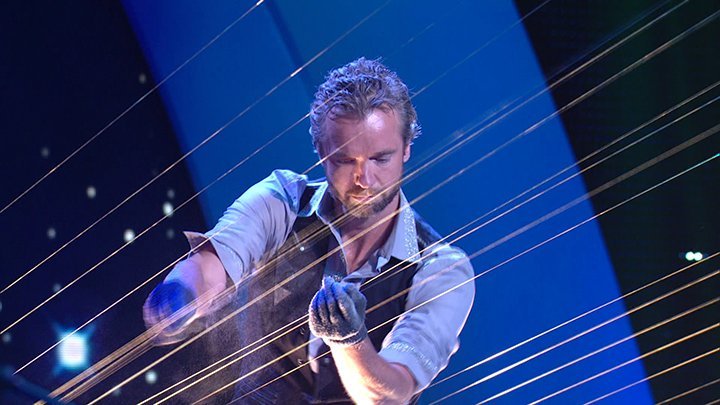 At once primitive and futuristic, standing at the crossroads of music and art, The Earth Harp incorporates sculpting, architecture and sound design. The Earth Harp was built and developed by William Close, a New York native and alumni at the Art Institute of Chicago. While studying at the institute, Close, an avid musician, started concocting, then building, his own instruments, turning them into functioning, great-sounding entities. The body of The Earth Harp rests on the stage, while the strings travel over the audience, attaching to the back of the theatre, concert hall and/or festival ground, turning every space into an instrument. By rubbing violin rosin covered gloves along the strings, the Earth Harp’s bowed tones and overlapping ripple effect makes it sound as if it were being played in some vaulted cathedral, giving the music a sanctified quality.  Close’s celebrated Earth Harp earned him a finalist slot on NBC’s America’s Got Talent and was recently named by the World Record Academy as creating and holding the record for the world’s largest stringed instrument.  Close has designed at least two permanent Earth Harp installations, one as part of Cirque du Soleil’s show KA at the MGM Las Vegas, the other as part of a 1,300-seat theater aboard the Royal Caribbean International’s newest ship, Quantum of the Seas. He has brought his Earth Harp to iconic venues like Rome’s Coliseum, Washington, DC’s Kennedy Center, New York’s Lincoln Center, Seattle’s Space Needle, Shanghai’s Grand Theater, Sao Paulo’s Theatro Muncipal, Qatar’s Dhow Harbour, as well as major U.S. festivals like Lollapalooza, Coachella, Bumbershoot, Burning Man and Lighting in a Bottle.  With an interest in soundtrack work, Close has also recorded music for Game of Thrones composer Ramin Djawadi for Guillermo del Toro’s Pacific Rim.

William Close and the Earth Harp Collective
Part of the: January Series