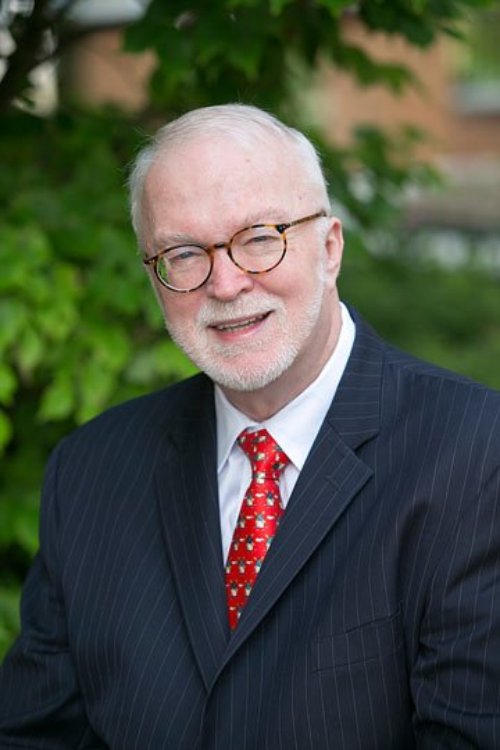 George pushes Christians away from cynicsm and imperialism alike

Timothy George admitted when he started to speak Wednesday that he was going to be addressing a big topic: theology in an age of terror. Still, he was able to approach the gargantuan matter by reaching back into history and drawing on the wisdom of Saint Augustine from The City of God.

The Roman Empire at the time of The City of God was in a state of flux after the fall of Rome to the Visigoth Aleric in 410. The early 5th century was a time of great instability and fear for those living in an empire that hadn’t seen this kind of threat in 800 years. Augustine’s great tome was written to teach Christians how to live in a world in which such terror reigned.

Christians had, for the past century, enjoyed power on their side. Now all of that was in question. Should Christians then escape into apocalyptic visions of deliverance, or fight for what was “rightfully” theirs by means of imperialistic crusades? St. Augustine said no to both of these options, teaching Christians to walk the middle way—to view their lives on earth as merely a pilgrimage while still engaging in civil society by loving their neighbors and seeking justice for all.

In the words of the 20th-century theologian Jean Bethke Ehlstain, Augustine encouraged Christians in his age of terror to demonstrate a “chastened form of civic virtue.” George encouraged the January Series audience to demonstrate the same attitude toward life on earth, given that the age in which we now live is so similar to that of St. Augustine. Stop seeking a utopian society like the Marxist’s did in the former Soviet Union—this kind of peace cannot be established on earth while sin yet prevails. At the same time, stop resorting to cynicism, an attitude that only gives you permission to withdraw into your own circle centered on comfort, despair, self-righteousness or apocalyptic escapism.

In conclusion, George shared a story about C.S. Lewis in which Lewis, teaching students at Cambridge on the brink of World War II, told them that they must continue their studies. Even amidst the uncertainty and the fear, Lewis insisted that they continue in their calling to pursue truth and light. In kind, George told the January Series audience that this is our calling too—to continue living in the light of God’s beauty, ever sharing his love with neighbors and enemies alike.

Timothy George is the founding dean of Beeson Divinity School and has been at Beeson since its inception in 1988. He teaches church history, historical theology, and theology of the Reformers. He is currently serving as executive editor for Christianity Today along with serving on the editorial advisory boards of The Harvard Theological Review, Christian History, and Books & Culture. He has served on the Board of Directors of Lifeway Christian Resources (formerly the Baptist Sunday School Board) of the Southern Baptist Convention. A prolific author, he has written more than 20 books and regularly contributes to scholarly journals. His textbook, Theology of the Reformers, is the standard textbook in many schools and seminaries on reformation theology. It has now been translated into several languages. He has been active in the evangelical dialogue with the Roman Catholic Church in addition to being a highly sought after preacher and conference speaker. As founding dean, George has been instrumental in shaping the character and mission of Beeson Divinity School. An ordained minister, he has pastored churches in Tennessee, Alabama, and Massachusetts. He and his wife, Denise, have two children, Christian and Alyce.

Theology for an Age of Terror
Part of the: January Series