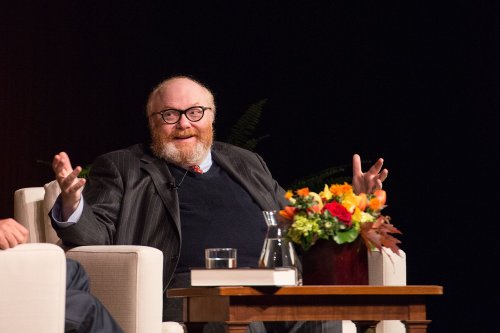 "There's no excuse for a dull book, a dull museum, or a dull speech," says Mr. Smith. "Especially when dealing with history - the most fascinating subject I know."

Richard Norton Smith is a familiar face to viewers of C-SPAN, ABC, and the News Hour with Jim Lehrer. A 1975 Harvard graduate, Smith is the author of eight books; his Thomas E. Dewey and His Times was a finalist for the 1983 Pulitzer Prize. Prior to accepting a 2006 appointment as Scholar in Residence at George Mason University, Smith served as director of the Hoover, Eisenhower, Reagan, Ford, and Lincoln presidential libraries. Presently working on a definitive biography of Nelson A. Rockefeller, Smith is also part of the team creating ambitious new exhibits for Ford’s Theater.

Two years later he went to work for Senator Bob Dole. He collaborated with the Doles on their joint autobiography, Unlimited Partners (1988; revised 1996). More recently he assisted Senator Dole on his 1998 book of political humor, Laughing (Almost) All the Way to the White House, and a sequel, Great Presidential Wit, published early in 2001.

Perhaps best-known as a historian and biographer, Mr. Smith is currently at work on a life of Nelson A. Rockefeller based on extensive original research and interviews with Rockefeller associates.

Smith's first major book, Thomas E. Dewey and His Times, was a finalist for the 1983 Pulitzer Prize. He has also written An Uncommon Man: The Triumph of Herbert Hoover (1984), The Harvard Century: The Making of a University to a Nation (1986) and Patriarch: George Washington and the New American Nation (1993). In June 1997, Houghton Mifflin published Mr. Smith's The Colonel: The Life and Legend of Robert R. McCormick, which received the prestigious Goldsmith Prize awarded by Harvard's John F. Kennedy School, and has been described by Hilton Kramer as "the best book ever written about the press."

In December, 2001 Mr. Smith became director of the new Robert J. Dole Institute of Politics at the University of Kansas in Lawrence. There he supervised construction of the Institute's $11.3 million permanent home and launched a Presidential Lecture Series and other high profile programs. In October, 2003 he was appointed the first Executive Director of the Abraham Lincoln Presidential Library and Museum, a four building complex in Springfield, Illinois that opened in 2004.

Lincoln at 200: The Measure of a President
Part of the: January Series


The Biographer on His Desert Island
Part of the: January Series