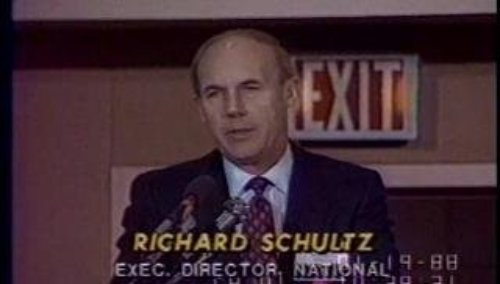 Dick started his professional career as a basketball coach at Humboldt, Iowa High School and followed that endeavor for 25 years, most of it at the University of Iowa. In 1976 he left coaching to become the Director of Athletics at Cornell University in Ithaca, NY. In 1981, he went to the University of Virginia as Director of Athletics and during that time became Chairman of the NCAA Basketball Tournament selection committee as well as Chair of the NCCA TV negotiating committee.

In 1987 he was named the 2nd Executive Director of the NCAA where he oversaw major changes in the organization and was charged with opening up the NCAA and making it more users friendly. During that time he was responsible for negotiating the NCAA’s first $ One Billion Basketball TV contract.

The 1950 graduate of Central College in Iowa also had a strong competitive athletic background, winning 10 Varsity letters in Football, Basketball and Baseball. He is a professional pilot, with commercial instrument, single, multi-engine and Learjet rating and has been awarded seven Honorary Doctorate Degrees from U.S. Colleges and Universities.

Athletics in the '90's: A Decade of Change
Part of the: January Series