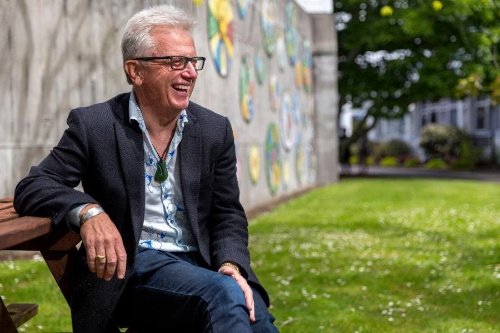 Professor Peter O’Connor is the Director of the Centre for Arts and Social Transformation at the University of Auckland, New Zealand. He is an internationally recognized expert in making and researching applied theatre and drama education. He has made theatre in prisons, psychiatric hospitals, earthquake zones, and with the homeless. He is the Academic Director of the Creative Thinking Project, a multi and cross-disciplinary research program that investigates the nature and application of creativity in everyday life. His work in Christchurch schools following the series of earthquakes led to UNESCO funded research and program development and the development of the Teaspoon of Light Theatre Company which then worked in Mexico City after major earthquakes in 2017. O’Connor’s most recent research includes multi and interdisciplinary studies on the creative pedagogies and the arts, the nature of embodied learning, and the pedagogy of surprise. In 2019 the play he directed with the Hobson Street Theatre Company, New Zealand's only theatre company for people who are or have been homeless, won the Arts Access Creative New Zealand Community Arts Award. He continued his theatre making with the homeless at the Museum of Contemporary Art in Los Angeles in conjunction with the Skid Row Housing Trust. In 2020 he was presented with the President's Award by Drama New Zealand for his lifelong contribution to drama education and social justice. Most recently, he led the development of Te Rito Toi, an online resource to support the return to schools during COVID-19 by using an arts and wellbeing approach. Being used in 120 countries around the world, the site had over 280,000 page views in its first month of use.

Arts: Healing Balms for a Sick World
Part of the: January Series