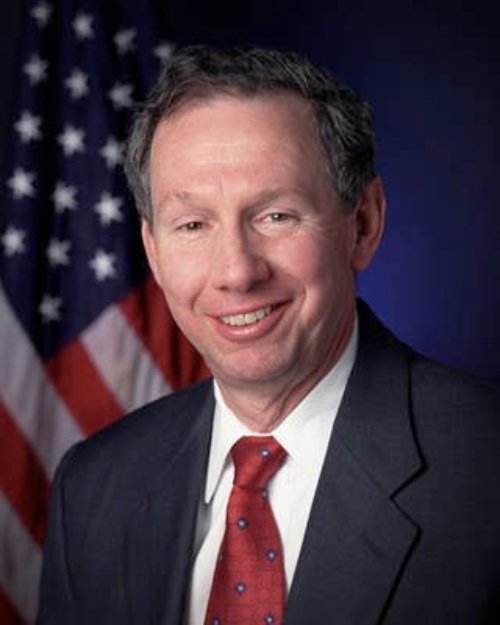 Listen to the Inner Compass interview (#811) of
Michael Griffin that also took place while he was at Calvin College.

Griffin highlights the past, future of NASA

NASA opens new frontiers through space exploration and creates new economic opportunities, a critical driver of innovation. Today, space capabilities are pervasive in our lives, critical to a range of activities that create and provide value to human beings, and America's annual investment in NASA is less than one penny out of every federal dollar spent. Out of this small investment over many years, NASA pioneered research in satellite communications which led to 24-hour news anywhere in the world, accurate weather monitoring and climate change predications, satellite navigation and precise timing, and next generation air traffic management systems to name a few areas. The primary goal of the President's American Competitiveness Initiative is to provide a comprehensive strategy to keep America the most innovative nation in the world by strengthening our scientific education and research, improving our technological enterprise, attracting the world's best and brightest workers, and providing 21st century job training.

NASA will need the best and the brightest engineers and scientists to help open up new frontiers onboard the International Space Station, pilot the Orion Crew Exploration Vehicle to outposts on the Moon, and continue the journey to Mars and beyond while also undertaking scientific discoveries of the fundamental physics that forms our universe.

Michael Griffin was nominated by President George W. Bush and confirmed by the US Senate in April 2005 as the 11th Administrator for the National Aeronautics and Space Administration. He leads the NASA team and manages the U.S. vision for space exploration.

Prior to being nominated as NASA Administrator, Griffin was serving as Space Department Head at Johns Hopkins University's Applied Physics Laboratory in Laurel, Md. He was previously President and Chief Operating Officer of In-Q-Tel, Inc., and also served in several positions within Orbital Sciences Corporation, Dulles, Va., including Chief Executive Officer of Orbital's Magellan Systems division and General Manager of the Space Systems Group.

Earlier in his career, Griffin served as chief engineer and as associate administrator for Exploration at NASA, and as deputy for technology at the Strategic Defense Initiative Organization. He has been an adjunct professor at the University of Maryland, Johns Hopkins University, and George Washington University, where he taught courses in spacecraft design, applied mathematics, guidance and navigation, compressible flow, computational fluid dynamics, spacecraft attitude control, astrodynamics and introductory aerospace engineering. He is the lead author of more than two dozen technical papers, as well as the textbook, "Space Vehicle Design."

A registered professional engineer in Maryland and California, Griffin is a member of the National Academy of Engineering and the International Academy of Astronautics, an honorary fellow of the American Institute of Aeronautics and Astronautics (AIAA), a fellow of the American Astronautical Society, and a member of the Institute of Electrical and Electronic Engineers. He is a recipient of the NASA Exceptional Achievement Medal, the AIAA Space Systems Medal, and the Department of Defense Distinguished Public Service Medal, the highest award given to a non-government employee.