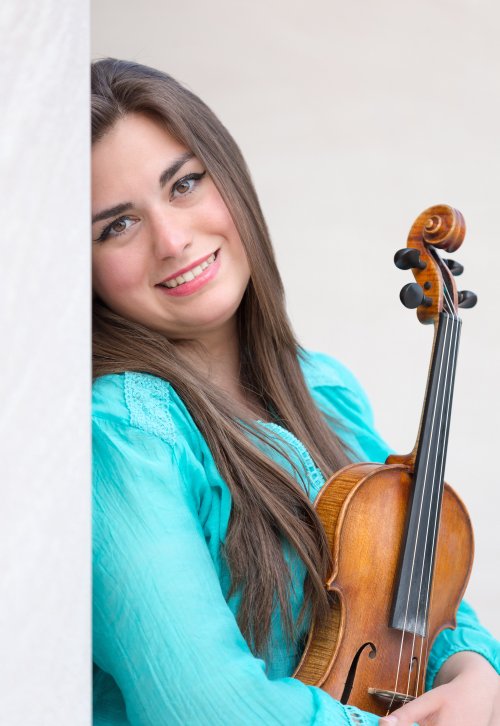 "Music is a very powerful language. It removes barriers between people and nations. For me, it was the bridge that carried me from the war to the United States. It saved my life! Through music, we communicate, advocate, inspire and express the things that are hard to express by any other word or language. Whenever I perform, I feel I get to tell the story of my suffering country and people. I am a Christian, who has performed Jewish themes like Schindler’s List for Muslim communities. I feel this is a proof that music opens the door for people to better understand each other, and feel the pain this world has felt in hope for a better future. My hope is to keep using music to help heal the pain our world has felt and create a peace platform for everyone." -- Mariela Shaker

Mariela Shaker, born 1990 in Aleppo, Syria, started playing the violin at the age of ten when she joined the Arabic Institute of Music in Aleppo (1999). She graduated from the institute in 2004 with distinction. Mariela has been a very active performer in Syria, and has taken part in many festivals and concerts in Aleppo including a solo violin recital in the Directory of Culture and in the St. Ephrem Syriac Orthodox Cathedral in 2008. Mariela has received many accolades in Syria and was invited to participate in the Dubai Arabian Competition and to play with the Emirate’s Youth Symphony Orchestra. In 2009, she joined the Syndicate of Artists in Syria. Mariela taught the violin for five years at the Arabic Institute of Music. In 2011, she auditioned in London, and subsequently received an offer to complete her music studies in the Trinity Laban Conservatoire for Music. In 2013, Mariela received a scholarship to attend Monmouth College to study Music Performance for her second Bachelor’s degree. She previously received her first Bachelor’s Degree in Business Administration from Aleppo University. Prior to just graduating from Monmouth College, Mariela received an honor for Excellence in Music Performance. She has also been awarded a full tuition academic scholarship so as to study for her Master’s in Music Performance at DePaul University.

Mariela is a member of the Knox-Galesburg Symphony Orchestra. From 2013 to 2015, she served as a concertmaster for the Monmouth College Chamber Orchestra. Mariela appeared as a concert violinist when she performed solo with Mesopotamian Symphony Orchestra in California Theater. On June 20, 2015 Mariela performed a recital at the Kennedy Center in celebration of World Refugee Day which has been organized by UNHCR. Mariela has been named as a Champion of Change for World Refugee by president Obama and was honored at the White House, 2015.  In December she played for members of the U.S. legislature. Recent engagements in 2016 include an invitation by Cate Blanchett for a performance in London and a performance for the first Scottish Minister in Scotland at Beyond Borders International Festival. In November, 2016 Mariela got an invitation from International Rescue Committee to perform in present of Queen Rania of Jordan.

Mariela has been profiled by the Huffington Post, Chicago Tribune, Washington Post, Buzz Feed, Woman’s Day and many others. Mariela is trying to use her music to build bridges and promote peace and raise awareness for the plights of the Syrian people. Mariela is the peace ambassador of World Council of Arameans. What is remarkable about Mariela is that as a refugee, not only her music is heard, but her voice for refugees in need! Though her own family has no electricity and many times she is unable to have contact, she perseveres for this noble cause.

‘’Fled Syria And Found Refuge On The Stage. Mariela Shaker is singular. A virtuoso’’….BuzzFeed

Finding Refuge on the Stage
Part of the: January Series