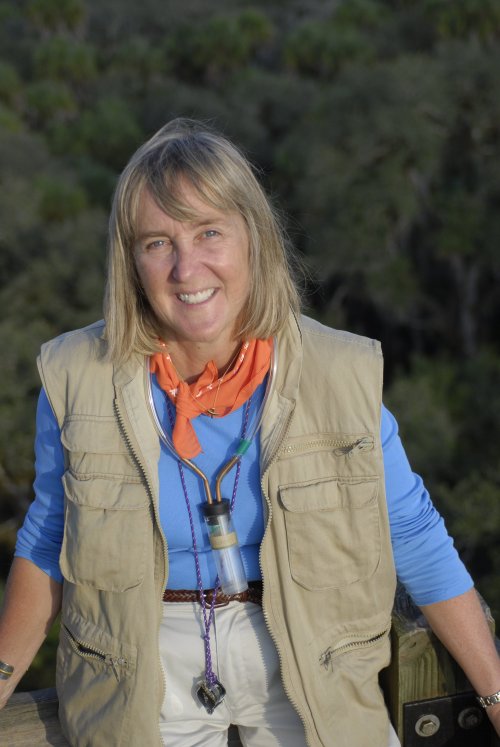 On Tuesday, biologist Margaret Lowman, better known as “Canopy Meg,” spoke to the January Series audience about her fascinating work studying the biodiversity present in treetops all over the world.

Lowman didn’t just present her findings from the decades she’s spent doing scientific research in treetops all over the world; she offered insight into ecotourism, parenting, education, conservation efforts and even diplomacy. Her talk was interspersed with mentions of her two sons who spent much of their childhood as Lowman’s personal “research assistants.” This, she said, convinced her just how important it is to expose children to nature and “let them get a little bit muddy.” Lowman has taken several families along with her on research trips, giving them a chance to spend time together away from technology. These kinds of experiences also help to instill in children deep care for creation. This approach to education, Lowman says, is called “no child left indoors.”

On a research trip in Cameroon, Lowman was struck by a sense that once she and her team of 50 scientists left the site, they would be leaving nothing with the local people for whom the forest was home. The scientists would return home, publish their papers and receive promotions, but then a company would come to the people left behind in Cameroon, convince them to sell their land for logging purposes, and in return lose their natural home. With the help of a National Geographic grant, Lowman returned to Africa where she helped to educate the people near her research site about the biodiversity present in the treetops and how they might begin a sustainable business from the abundance there instead of allowing the entire forest to be destroyed by international companies. She did the same thing for a village in Western Samoa where she helped to build a treetop walkway to draw tourists and create sustainable income for the local school system.

The recurring theme of Lowman’s talk was the importance of preserving nature for all the benefits it provides and all the beauty present there. Preservation efforts will benefit children directly and teach them to become good stewards of what has been given to them.

Meg Lowman, better known as Canopy Meg, is the Director of Environmental Initiatives at New College of Florida. Her expertise involves canopy ecology, particularly plant-insect relationships, and spans over 25 years in Australia, Peru, Africa, the Americas, and the South Pacific. She has authored over 95 peer-reviewed publications and three books. Meg has developed an expertise for the use of different canopy access techniques, including ropes, walkways, hot air balloons, construction cranes, and combinations of these methods.
She frequently speaks about her jungle adventures and about rain forest conservation to educational groups, ranging from elementary classes to corporate executives to international conference. She received the Margaret Douglas Medal for Achievement in Conservation Education from the Garden Club of America, The Eugene Odum Prize for Excellence in Ecology Education
from the Ecological Society of America, election to Leadership Florida, and is part of the senior
management team of NEON for the National Science Foundation. She co-chaired the First and
Second International Conferences on Forest Canopies, and was chief scientist for the Jason Project in Education. Life in the Treetops, received a cover review in the New York Times Sunday Book Review. Her latest book It’s a Jungle Up There: More Tales from the Treetops,
co-authored with her sons Edward and James Burgess, chronicle their family’s adventures in the forest canopies.

It's a Jungle Up There: Exploration of the Treetops
Part of the: January Series