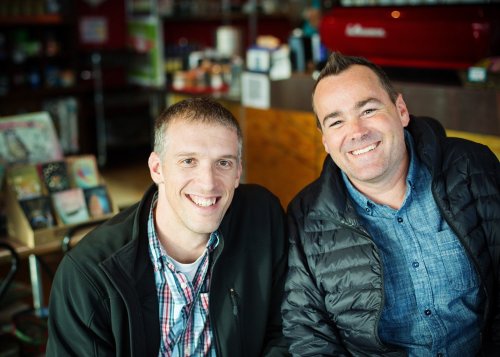 Born a little over 36 hours apart, Justin Skeesuck and Patrick Gray have been blessed with a lifelong friendship.  Their lives have been intertwined for 40 years and have brought them many adventures - most notably, their 500-mile trek across the vast terrain of Spain. Justin, who lives with a progressive neuromuscular disease and manages life from a power wheelchair, had the urge to tackle the Camino de Santiago or Way of St. James. When asked, Patrick responded with "I'll push you!"

Justin Skeesuck and Patrick Gray live by the mantra "Life is not defined by its limitations, it is defined by what is accomplished in spite of those limitations" and "It's only impossible because we haven't done it yet." Though Justin has very limited use of his arms or legs, his insatiable desire to live life and his willingness to be vulnerable have take him places few dream of. Patrick's servant heart and fierce determination combined with Justin's limitless mindset make for a duo that can empower others to move beyond their limitations, aspire to greatness, and achieve the impossible. Their 500-mile journey known as "I'll Push You" has taken them far beyond the confines of the journey itself. Their heartfelt and hilarious storytelling has placed them in front of universities, health care institutions, Fortune 50 companies and on the TEDx Stage. They have been featured and interviewed on NBC, ABC, Fox & Friends, The Huffington Post and many worldwide news media outlets.

I'll Push You: A Story of Radical Friendship, Overcoming Challenges and the Power of Community
Part of the: January Series