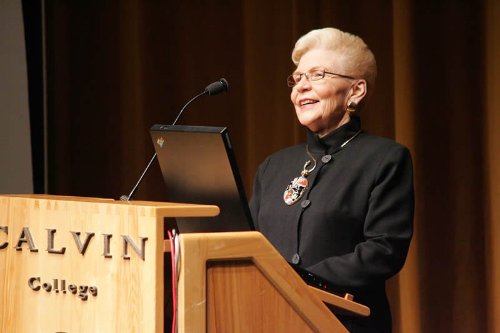 Also, listen to the Inner Compass interview (#721 of season 7) of June Hamersma that took place following her presentation on The January Series. June discusses "Designing a Lecture Series" with host Shirley Hoogstra.

On it's 20th year, watch a tribute to June's 20 years as the director of the January Series.

Don't call it a retirement. Or a resignation.

For June Hamersma her plan to leave her duties as director of The January Series of Calvin College following the 2007 season is a "moving on."

"I have had 20 wonderful, productive and rewarding years at Calvin," she says in her matter-of-fact, straight-forward fashion. "Now it is time for me to do something else."

"June has been a great representative of Calvin College and its Christian, liberal arts mission," he says. "The January Series has become a vital and integral part of each Calvin year and has provided the entire community with wonderful intellectual sunshine in the middle of winter. June has been an inspiration and a role model. We will miss her."

Meanwhile Hamersma is already busy planning the 2007 edition of the January Series, widely recognized as one of the best college lecture series in the country (the series won accolades three times in the 1990s from the International Platform Association as the nation's best campus lecture series before the IPA retired the award in 1999).

That commitment to excellence goes back to Hamersma's hiring in August 1987 when she pulled together a stellar series in a matter of months. In fact the 1988 January Series averaged almost 400 attendees per day.

These days the January Series has become one of Calvin's most public faces, offering a series of provocative lectures daily each January, all of which are
free and open to all thanks to Hamersma's tireless pursuit of underwriters and her ability to get big-name speakers for a fraction of their normal speaking fee. Daily attendance in the Fine Arts Center at Calvin for the Series these days runs closer to 1,400 and the Series is established as a West Michigan destination in the month of January.

So now, at the age of 77, Hamersma is ready for her next challenge, whatever that might be.

"I don't feel old," she says with a chuckle, "but I don't know how one is supposed to feel at 77. My mind is full of new ideas and now seems like a good time to implement them. I don't know what possibilities might lie before me,
but I'm excited to find out."

She's thinking her next project might be public relations assistance for local companies who do not have large PR staffs, or PR staffs period. That would bring her in some ways full circle, back to the days when she was director of
publicity and public relations for the Riverside Church in New York City.

But, she's not hung up on the specifics of her next pursuit, although she does say that she never wanted to do the same thing twice.

"You need to be on the cutting edge," she says. "I always said 'You're only as good as your next series.'"

Hamersma comes by her zest for life honestly. Her mother Cecilia Bos raised four children single-handedly, retired at the age of 80 and lived to be 98.

Of her mother Hamersma says simply: "She was an inspiration."

A 1951 graduate of Calvin (who worked three jobs and put herself through college in three and a half years), Hamersma says Calvin has been a special part of her life for over half a century now.

"God has given all of us talents," she says, "but not all of us have had a place in which to use them. I have always had a place."

For two decades now Calvin has been that place. It was, says Hamersma, a match made in heaven.

Hamersma also has believed in Grand Rapids, where she was born and raised.

She is founding chair of the Hospice of Michigan Foundation and has chaired three major fundraising projects for the Foundation, the latest being the 2004 Big Picture Project which featured the premiere of the Polar Express. In honor of her work for Hospice the June B. Hamersma Planned Giving Society of Hospice of Michigan was established in 2004.

And her list of community awards grows by the month. In August of 2006 she was awarded the E-Quality Award from the Women's Resource Center. In April 2006 she was named Communicator of the Year, along with Calvin president Gaylen Byker, for her work as co-chair with Byker of the Petra: Lost City of Stone exhibition hosted by Calvin a year ago. Calvin also was honored with a Gold Award for Petra at the recent West Michigan Public Relations Society of America's PRoof Awards.

Hamersma has been married for 48 years to John Hamersma, who recently retired after a 50-year career at Calvin as a music professor. The couple built their Grand Rapids home 45 years ago and recently renovated it.

Of their abode Hamersma says with a glint in her eye: "I love that house. We'll live there until they carry us out feet first."

Her "moving on" from Calvin is equally on her own terms.

During her presentation, June will reflect on the past twenty years as Director of The January Series.

June Hamersma, Founder and Director of The January Series announces her "moving on" after 20 years of leadership. Read Calvin's press release and the Grand Rapids Press article for more information.