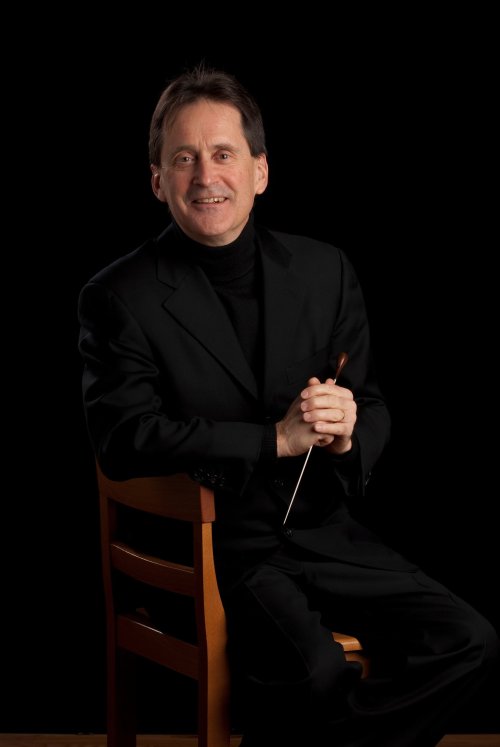 As associate conductor of the Grand Rapids Symphony, JohnVarineau conducts the orchestra on all of its concert series, including the Richard and Helen DeVos Classical Series, Fox Motors Pops Series, the SymphonicBoom Series, Crowe Horwath Rising Stars Series, DTE Energy Foundation Family Series, PNC Lollipop Series and the D&W Fresh Market Picnic Pops. He also conducts a variety of educational and outreach concerts throughout the area. Mr. Varineau is committed to nurturing the next generation of classical music lovers. He is a frequent visitor to area schools, and shares an infectious enthusiasm with students throughout West Michigan.

The 2011-2012 Season marks his 27th anniversary with the Symphony and 24th year as the conductor of the Grand Rapids Youth Symphony and Classical Orchestra. He has been a visiting orchestra conductor both at Calvin College and Western Michigan University.  Recently, he was a guest conductor for the Traverse City Symphony.

Mr. Varineau also appears in a variety of summer music programs in the region and plays in the chamber music group, Montage. In 2003, he appeared twice as a guest conductor with the Arkansas Symphony. Additionally, he conducts the Grand Rapids Symphony for performances by the Grand Rapids Ballet Company. Mr. Varineau is a clarinetist and teaches clarinet at Calvin College, Cornerstone University and Grand Rapids Community College.  Mr. Varineau attended Michigan State University, University of Wyoming and Yale School of Music for his clarinet training. He has made three recordings with the Grand Rapids Symphony and three with the Royal Scottish National Orchestra. He and his wife, Gwen, have a daughter, Jade, and a son, Justin.

• He’s a mountain man. Every day, he visits a Web cam in his hometown of Laramie, Wyo., that’s pointed at the mountains. "I’ve lived in Grand Rapids for 29 years -- more years in Grand Rapids than anywhere -- but I still consider myself a Westerner.” If you head out West, he’ll ask you to kiss the ground there for him.

• His dad changed the spelling of the family name to Varineau from Verino, because he was convinced the former was the original spelling and the family origin is French. "What if I’m really Italian?" he asks.

• He was a teenaged folk dancer, going to a folk dancing club every Saturday night. The community center was filled with kids through senior citizens doing Israeli, Greek and Bulgarian folk dances.

• He eats too much candy, he says. Don’t let him breathe on you. "Hot tamales, atomic fireballs, red hots," he says, listing his favorites.

Read more about John in a 2010 profile written by the Grand Rapids Press.

The Uses, Misuses and Abuses of Music
Part of the: January Series