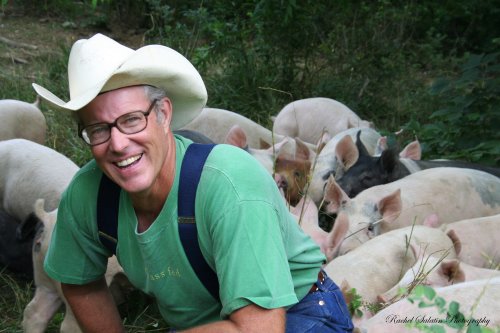 Also, watch the Inner Compass interview (episode # 1212) that was recorded with Joel Salatin while he was on Calvin's campus.

Joel Salatin is a full-time alternative farmer in Virginia’s Shenandoah Valley. He writes extensively for agriculture magazines and is a popular speaker who defends small farms, local food systems, and the right to opt out of the conventional food paradigm. His family’s farm, Polyface Inc, has been featured in Smithsonian Magazine, National Geographic, Gourmet, and countless other radio, television and print media. Profiled on the Lives of the 21st Century series with Peter Jennings on ABC News, his after- broadcast chat room fielded more hits than any other segment to date. The farm achieved iconic status as the grass farm featured in the New York Times bestseller Omnivore’s Dilemma by food writer guru Michael Pollan and more recently the movie Food, Inc. He is author of a number of books including the recently released Folks, This Ain't Normal, which is a farmer's advice for happier hens, healthier people and a better world.

Listen to Michael Pollan, author of "The Omnivore's Dilemma" comment on Joel Salatin and Polyface farm.

Dancing with Dinner
Part of the: January Series