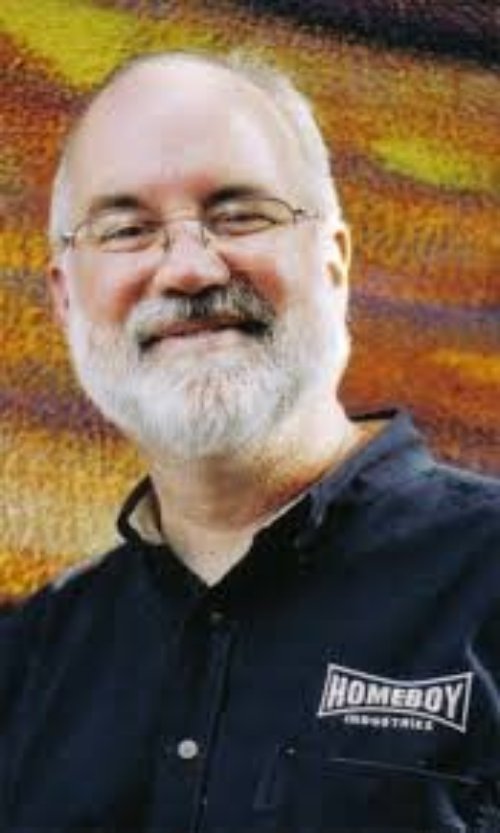 Fr. Gregory Boyle – best known as Fr. Greg by all who meet him -- was born in Los Angeles, one of eight children. His father, a third-generation Irish-American, worked in the family-owned dairy in Los Angeles County and his mother worked to keep track of her large family. As a youth, Fr. Greg and several of his siblings worked side by side with their father in the dairy. After graduating from Loyola High School in Los Angeles in 1972, he decided to become a Jesuit and was ordained a priest in 1984.

Prior to 1986 Fr. Boyle taught at Loyola High School and worked with Christian Base Communities in Cochabamba, Bolivia. He was appointed as Pastor of Dolores Mission in the Boyle Heights neighborhood of Los Angeles in 1986 where he served through 1992. He then served as Chaplain of the Islas Marias Penal Colony in Mexico and Folsom Prison, before returning to Los Angeles and Dolores Mission.

Homeboy Industries traces its roots to “Jobs For A Future” (JFF), a program created in 1988 by Fr. Greg at Dolores Mission parish. In an effort to address the escalating problems and unmet needs of gang-involved youth, Fr. Greg and the community developed positive alternatives, including establishing an elementary school, a day care program and finding legitimate employment for young people. JFF’s success demonstrated the model followed today that many gang members are eager to leave the dangerous and destructive life on the “streets.”

In 1992, as a response to the civil unrest in Los Angeles, Fr. Greg launched the first business (under the organizational banner of JFF and Proyecto Pastoral, separated from Dolores Mission Church): Homeboy Bakery with a mission to create an environment that provided training, work experience, and above all, the opportunity for rival gang members to work side by side. The success of the Bakery created the groundwork for additional businesses, thus prompting JFF to become an independent non-profit organization, Homeboy Industries, in 2001. Today Homeboy Industries’ nonprofit economic development enterprises include Homeboy Bakery, Homeboy Silkscreen, Homeboy Maintenance, Homeboy/Homegirl Merchandise, and Homegirl Café.

As Executive Director of Homeboy Industries and an acknowledged expert on gangs and intervention approaches, Fr. Boyle is a nationally renowned speaker. He has given commencement addresses at several prestigious universities, as well as spoken at conferences for teachers, social workers, criminal justice workers and others about the importance of adult attention, guidance and unconditional love in preventing youth from joining gangs. Fr. Greg and several “homies” were featured speakers at the White House Conference on Youth in 2005 at the personal invitation of Mrs. George Bush. Fr. Greg is also a consultant to youth service and governmental agencies, policy-makers and employers.

Fr. Boyle was a member of the State Commission on Juvenile Justice, Crime and Delinquency Prevention and is currently a member of the National Leadership Council of the Iris Alliance Fund, and serves on the Advisory Boards for the Loyola Law School Center for Juvenile Law and Policy and the National Youth Gang Center. He has received numerous accolades and recognitions on behalf of Homeboy and for his work with former gang members, including the California Peace Prize. On September 17, 2007, Fr. Greg received the “Humanitarian of the Year” Award from Bon Appétit magazine during their 10th Annual Awards Ceremony in New York. He also received the Caring Institute’s 2007 Most Caring People Award, and was recently honored with the 2008 Civic Medal of Honor from the Los Angeles Chamber of Commerce.

This year, 2010, marks the 22nd Anniversary of the work Father Greg began. Homeboy Industries, now located in downtown Los Angeles, is recognized as the largest gang intervention program in the county, and has become a national model.

Read about Father Greg and the gangs of East Los Angeles in G-Dog and the Homeboyswritten by Celeste Fremon.

Listen to an interview with Father Greg on NPR.

Tattoos on the Heart: The Power of Boundless Compassion
Part of the: January Series 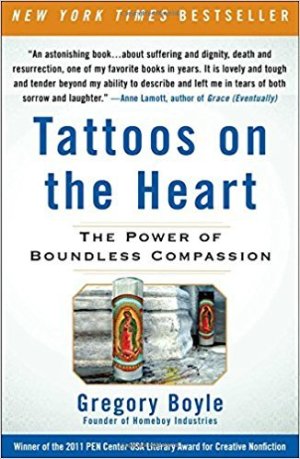 Tattoos on the Heart: The Power of Boundless Compassion
by Greg Boyle
Free Press (February 22, 2011)