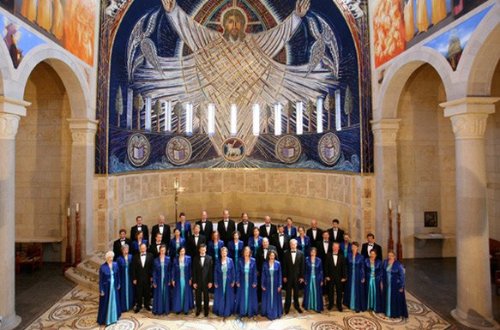 Singled out by the American Record Guide for "performances which are impeccable and deeply moving," and by Richard Dyer of the Boston Globe for having "a quality that lies beyond words," the internationally renowned 40-voice choir Gloriæ Dei Cantores (Singers to the Glory of God) holds a passionate dedication to find and express the most authentic and compelling interpretation of sacred choral music spanning two millennia.

Sharing its vision of inspiration and hope, Gloriæ Dei Cantores has touched the hearts of audiences and critics in 23 countries in Europe, Asia, and North America. The choir sings in 18 languages, has a discography of more than 30 recordings, and has appeared on the concert stage and in recordings with such artists as Gerre Hancock, Keith Lockhart, John Williams, Vladimir Minin, Samuel Adler, Daniel Pinkhim, Mark O'Conner, Stephen Cleobury, the late George Guest, and the late Margaret Hillis.

Director Elizabeth Patterson's mission to illuminate truth and beauty through choral artistry, is expressed through the spiritual context of the music. Singers, who range in age from 17 - 70, come from a wide variety of occupations, Christian traditions, and musical backgrounds, yet share a common depth of faith and commitment which is expressed in their singing.

In addition to touring internationally and across the United States, Gloriæ Dei Cantores sings weekly worship services at the Church of the Transfiguration, and hosts a concert series of great choral masterworks.

The Community of Jesus
Part of the: January Series