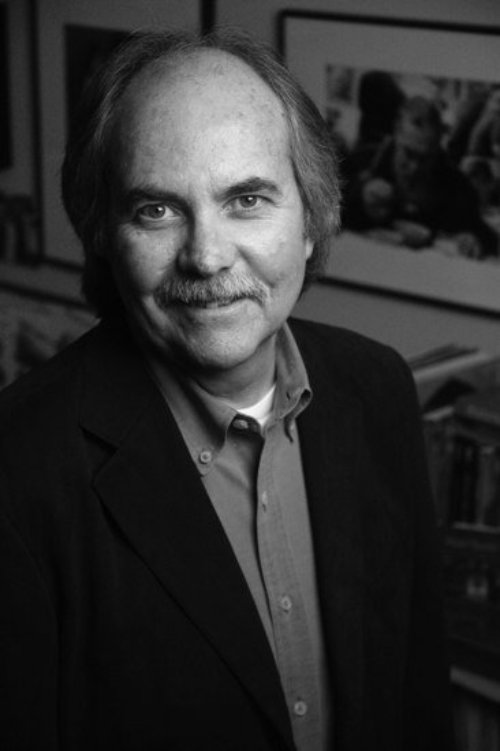 Listen to the Inner Compass interview (#716) of Gerard Thomas Straub that also took place while he was at Calvin College.

Gerard Thomas Straub is an award-winning author of four books, including a novel. His critically acclaimed book "The Sun and Moon Over Assisi" was named the best spirituality hardcover book of 2001 by the Catholic Press Association. His photo/essay book on global poverty, "When Did I See You Hungry?", features photographs taken in India, Kenya, Brazil, Jamaica, the Philippines and Mexico. Gerry has written and directed nine documentary films, three of which have aired on many PBS television stations, including "We Have a Table for Four Ready", which told the inspirational story of a soup kitchen run by Franciscan friars in Philadelphia. Prior to his conversion to Christianity, Straub produced several dramatic television series that have aired on CBS, NBC and ABC, including the wildly popular General Hospital. He also wrote and produced a nationally syndicated magazine show and created an internationally syndicated soap opera.

Mr. Straub's photography has been exhibited in the art gallery attached to the Cathedral of the Assumption in Louisville, Kentucky and also published in The New York Times and Sojourners magazine. He also taught a course on television writing and directing at the Pontifical Gregorian University in Rome, Italy. He has lectured and shown his films at the University of Notre Dame, St. Bonaventure University, the University of Dayton, Loyola Marymount University, Wheaton College and Chestnut Hill College. He has led retreats in California, Arizona, Connecticut, New York and Minnesota. He received an honorary doctorate degree in Humane Letters from St. Bonaventure University in May of 2003. In May of 2006, Mr. Straub will deliver the commencement address and received an honorary doctorate degree in Humane Letters from St. Francis University in Loretto, Pennsylvania.

Mr. Straub, who is a Secular Franciscan, is the founder and president of The San Damiano Foundation, which produces films that celebrate the spirituality of St. Francis of Assisi and the Franciscan concern for the poor, social justice, peace, non-violence, prayer and the integrity of creation. The San Damiano Foundation strives to put the power of film at the service of the poor. Mr. Straub has written and directed six documentary films for The San Damiano Foundation: "When Did I See You Hungry?" , which explores the Christian response to global poverty and is narrated by Martin Sheen; "Embracing the Leper" , which describes the heroic work of a Secular Franciscan who brings aid to the lepers and the poor of the Amazon region of Brazil; "Holy Pictures", a meditation on the importance of stillness and silence in the spiritual life; "Rescue Me", on the plight of the homeless in the Skid Row section of Los Angeles; "Endless Exodus" , on the plight of the undocumented migrants from Central America and Mexico; and "The Patients of a Saint" , which tells the inspirational story of an American doctor who abandoned his career and opened a home and clinic for chronically ill and impoverished children of Lima, Peru.

The San Damiano Foundation has been written about in The New York Times, Los Angeles Times, U.S. Catholic and Sojourners magazine, and has been featured in stories which have aired on Religion and Ethics Newsweekly (PBS), Life & Times (KCET-TV, the PBS station in Los Angeles), and News Conference (KNBC-TV News in Los Angeles).

Gerry Straub is a former member of the Board of Directors of Bread for the World, a Washington, DC based Christian lobbying organization that fights against hunger. Mr. Straub is also a former member of on the Board of Regents of the Franciscan School of Theology in Berkeley, California. In September of 2003, The University of Dayton presented Mr. Straub with the Daniel J. Kane Religious Communications Award, an annual award given to a person who has made "an outstanding lifetime dedication to gospel values through various forms of Media". Mr. Straub lives in North Hollywood, California with his wife and dog.

Poverty and Prayer and the Power of Film
Part of the: January Series