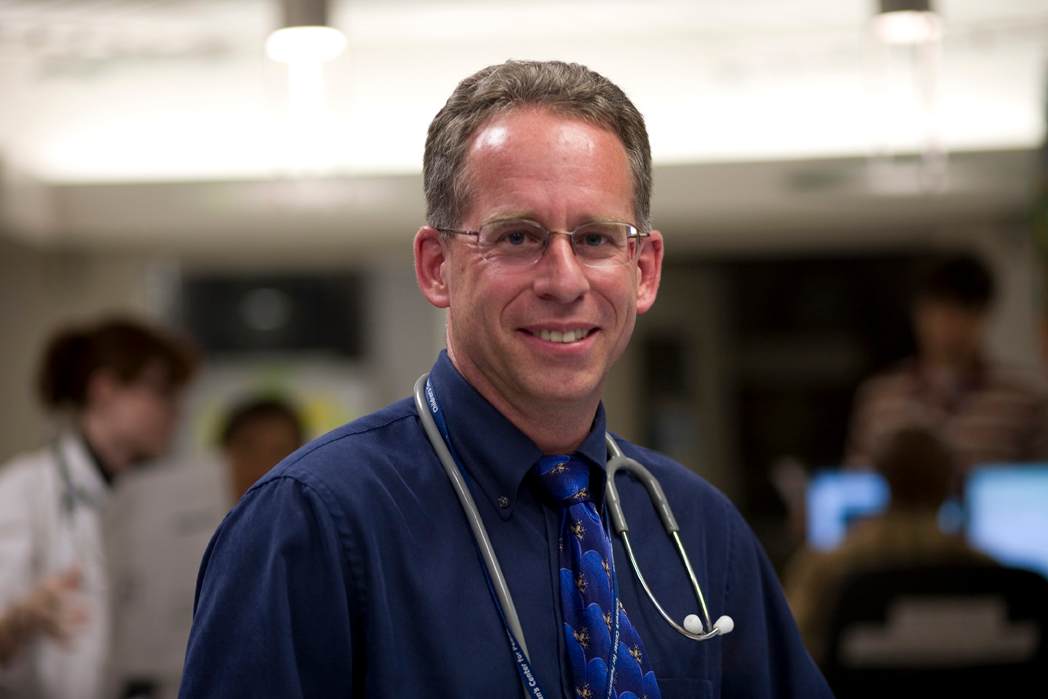 Listen to the Inner Compass interview (#812) of
Doug Diekema that also took place while he was at Calvin College.

Dr. Douglas Diekema presented a lecture Friday on his involvement with the controversial case of a girl with severe mental and physical disabilities.

Because the “Ashley case” has been distorted and misrepresented, Dr. Douglas Diekema, pediatrician and ethicist at the Children’s Hospital and Regional Medical Center in Seattle, Wash., began with a full explanation of the case.

“Ashley’s been explained as being ‘frozen in time’ or having received the ‘Peter Pan’ treatment, where she never leaves childhood,” he said. “Neither of those is correct.”

The true facts are that Ashley is a girl with profound neurologic and cognitive disability, functioning at about the level of a 3-6 month old. Her parents approached her pediatrician about restricting her growth, performing a hysterectomy and removing her breast buds so that they could keep her as a fully functioning member of their family and as comfortable as possible.

Diekema chaired the ethics committee that ultimately recommended allowing the procedures for Ashley. All three of the proposed procedures raised ethical issues, but the determining factor in each case was whether there was reason to believe Ashley would benefit and not suffer harm from the procedure.

The first step for the committee was to identify the question, which they agreed was “Is this in Ashley’s best interest?” he said. To determine this, Diekema relied on three principles (based on Micah 6:8): justice, beneficence and humility.

“Medicine is a form of beneficence [which he defined as the obligation to seek the good of others], but so is parenting.”

“This case was about making one little girl’s life and one family’s experience a little better,” he continued. “We were not trying to set a precedent or policy. We concluded that in cases where reasonable people disagree about what is in a child’s best interest, parents should be able to decide.”

Objections that have been presented to Diekema and his responses include:
• This is not natural—Neither is almost everything we do in medicine.
• You’re playing God—Then we are “playing God” every time we intervene medically.
• There is great potential for misuse—That is why we use care and put protection in place to make these decisions.
• This benefits the parents and not the child—It benefits both.
• This violates her dignity—This represents an assertion without any content. It’s not clear to me why this is undignified.

There was clearly no good choice in this situation, he said. When you’re making the decision you have to realize that there is moral ambiguity, and you have to exercise both courage and humility.

“You need to be aware that you are human,” he said. “The best ethicists have the most humility and are willing to listen to critiques.”

Douglas Diekema, M.D., M.P.H., is Associate Professor of Pediatrics at the University of Washington School of Medicine with an adjunct appointment in the Department of Medical History and Ethics. He serves as Director of Medical Ethics and Chair of the IRB at Children's Hospital and Regional Medical Center. He currently serves on the Committee on Bioethics of the American Academy of Pediatrics. He is coauthor of Christian Faith, Health, and Medical Practice (Eerdmans, 1989) and numerous articles on pediatric ethics and pediatric emergency care.

Love, Justice, and Humility: A Bioethicist meets the Pillow Angel
Part of the: January Series