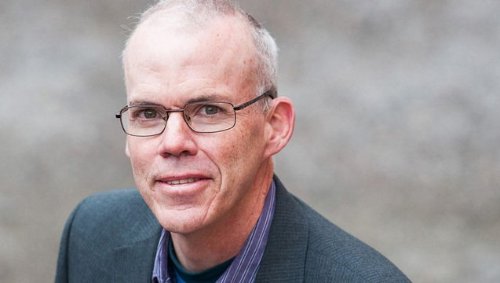 This is the main question that January Series speaker Bill McKibben asked in his talk titled “Deep Economy.” He began by talking about global warming and his experience in Vermont leading awareness campaigns urging Congress to cut carbon emissions by 80% by 2050, but that was only his introduction. What McKibben really wanted to get to was the way in which Americans have become accustomed to living in the past fifty years—with increasing amounts of material wealth. Promising to return to global warming and environmental awareness later, he plunged into a talk that explored more existential matters.

Are Americans really happier now that they drive SUVs and live in houses twice the size of homes Americans lived in fifty years ago? Even though it is difficult to measure subjective well-being, McKibben said, polls and other studies have shown that while material wealth in the United States is increasing, the happiness level of Americans has steadily declined since its peak in 1956.

Why are Americans unhappy? They’re disconnected from community and people. “When we separate ourselves into huge suburban houses in cul-de-sacs, we dramatically decrease the odds of running into each other,” McKibben said.

This kind of hyper-individualism does nothing for our satisfaction levels—or the environment. Community and the environment are intimately connected in McKibben’s concept of “deep economy.” Not only are the huge cars and houses keeping us separated from other people, but they also take enormous amounts of fuel to keep running.

Things need to get a lot smaller and people a whole lot more connected if we are going to solve the problem of global warming—and general happiness—in the United States and the wider world.

The same people who are meeting each other at farmers’ markets and community events are the same people who might come together and build grassroots efforts to reduce carbon emissions and pressure Congress to form policies to do the same.

“We are very much built to be together, to be in closer proximity,” McKibben said. “If we can do that together, then we have some chance of warding off this global environmental crisis.”

During the question and answer portion of McKibben’s lecture, Congressman Vernon Ehlers told the audience that though efforts to pressure Congress to do something about global warming are warranted, true change will happen when the people come together and make life changes that positively impact the environment.

To this, McKibben replied that there are a number of things that Americans can do to cut their energy consumption with little effort. Europeans already use 50% less energy per capita than do Americans and have pledged to further reduce their energy consumption by another 30%. They’ve challenged Americans to do the same, which, according to McKibben, should be like “losing five pounds by merely cutting off your hair.”

Bill McKibben is one of America's most important writers on business, culture and the environment . He is the author of ten books, including, most recently, Deep Economy: The Wealth of Communities and the Durable Future.

Deep Economy challenges the prevailing view of our economy that 'more' is 'better' and offers a realistic, if challenging scenario for the future, one that pursues prosperity beyond 'growth' as our economic ideal.

He raises the fundamental question: What is the economy for? And he stresses the need for strong local businesses as the backbone of strong local, interdependent communities. A wise and optimistic vision for a better future.

Bill's book The End of Nature is a classic work on the environmental crisis and was the first account of global warming for a general audience. First published in The New Yorker , it's been in thousands of classrooms and book discussion groups; it's been excerpted for major nature writing anthologies, and is published in 20 languages.
Bill McKibben's work combines personal engagement with the issues and careful thought about the past, present and future; unflinching realism with dedicated practicality; and an optimism grounded in what people are already doing and what is still possible to achieve to build a prosperous and fulfilling future.
Bill McKibben is a scholar in residence in Environmental Studies at Middlebury College. He led the largest demonstration to date in America about climate change and founded stepitup07.org, which is building local movements to support curbs on carbon emissions.

For all of human history, having more-that is, growing the economy-has always improved the human condition-until now. We have turned a corner , says Bill McKibben, and now pursuing economic growth as we have in the past will begin to degrade the quality of our lives, not improve it. We need a new understanding of the good life and a new way to achieve it through a deep economics that nurtures communities and aims toward a sustainable future for everyone.

Bill McKibben has written a profound book that explores the fundamental questions posed by an economic system that's committed to the ideal of growth. In Deep Economy , Bill offers compelling arguments for moving away from growth in our economics, he reports on local successes at developing solutions to the worst of our ecological problems, and he delivers an optimistic vision for what is achievable-what a 'deep economy' could look like and why it's worth our commitment.