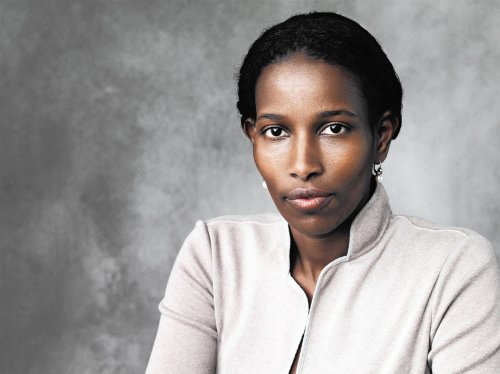 Ayaan Hirsi Ali was born in Mogadishu, Somalia in 1969. The daughter of a political opponent of the Somali dictatorship, Ayaan Hirsi Ali grew up surrounded by her family in exile. Her traditional Muslim upbringing continued from Somalia to Saudi Arabia, then to Ethiopia and Kenya.

As a young child, she was subjected to female genital mutilation, where she was “cleansed” with the aid of a pair of large scissors wielded by a local clansman. Unlike many children born at that time in Somalia, she had the good fortune to receive an education in local schools. As she grew into a young woman, she embraced Islam and strove to live as a devout Muslim. She admired the budding movement of the Muslim Brotherhood and supported the fatwah against Salman Rushdie. She covered herself with the hidjab and attended Quran classes. But increasingly she found herself asking questions for which she had no easy answer. One day, while listening to a sermon on the many ways women should be obedient to their husbands, she couldn’t resist asking, “Must our husbands obey us too?”

In 1992, Ayaan was married off by her father in a ceremony which she refused to attend to a distant cousin who lived in Canada. In order to escape this marriage, she fled to the Netherlands where she was given asylum, and in time citizenship. In her early years in Holland she worked in factories and as a maid. She quickly learned Dutch, and while attending the University of Leiden she worked as a translator for Somali immigrants. During this time she saw first-hand the inconsistencies between liberal, Western society and tribal, Muslim cultures, and the challenges of integration for Muslim immigrant groups in the West.

After earning her M.A. in political science, Ayaan worked as a researcher for the Wiardi Beckman Foundation in Amsterdam. She then served as an elected member of the Dutch parliament from 2003 to 2006. While in parliament, she focused on furthering the integration of non-Western immigrants into Dutch society, and on defending the rights of women in Dutch Muslim society. She campaigned to raise awareness of violence against women, including honor killings and female genital mutilation, practices that had followed the immigrants into Holland and which were, at the time, largely ignored by the Dutch legal system. In her three years in government, she found her voice as an advocate for women’s rights and an “enlightened Islam,” earning her both fame and infamy in her adopted country.

In 2004 Ayaan gained international attention following the murder of Theo van Gogh. Van Gogh had directed her short film Submission, a film about the oppression of women under Islam. The assassin, a radical Muslim, left a death threat for her pinned to Van Gogh’s chest.

In 2006, Ayaan had to resign from parliament in the wake of a political scandal surrounding her application for asylum status in Holland. Ever since she had entered Dutch politics, Ayaan had always been open about the fact that she not been accurate on her application form for asylum. (Ayaan had claimed that she was coming directly from war-torn Somalia. Fleeing an arranged marriage was not and is still not considered valid grounds for asylum in Holland). The then Dutch minister for Immigration, Rita Verdonk, decided that she would revoke Ayaan’s Dutch citizenship, arguing that Ayaan had mislead the authorities in 1992. However, after much political and public debate, and Ayaan’s resignation from Parliament, the Dutch authorities confirmed that Ayaan was indeed a Dutch citizen, leading to the subsequent fall of the Dutch government of the time.

Currently a resident fellow at the American Enterprise Institute in Washington DC, Ayaan researches the relationship between the West and Islam, women’s rights in Islam, and violence against women propagated in the name of religious and cultural arguments.

Ayaan lives with round-the-clock protection. Her willingness to speak out and her abandonment of the Muslim faith have made her a target for violence by Islamic extremists. Disowned by her father, she has few ties left with her family. Threatened time and again with death, this courageous woman refuses to be silenced.

Ayaan Hirsi Ali was named one of TIME Magazine’s “100 Most Influential People” of 2005, one of the Glamour Heroes of 2005 and Reader’s Digest’s European of the Year for 2005. She has published a collection of essays The Caged Virgin (2006), a memoir Infidel (2007) and has written and delivered many speeches and articles addressing her subjects of interest, including the importance of freedom of speech and the defense of the principles of the Enlightenment, the need to reform Islam, the rights of Muslim women.

Refusing to be Silenced
Part of the: January Series