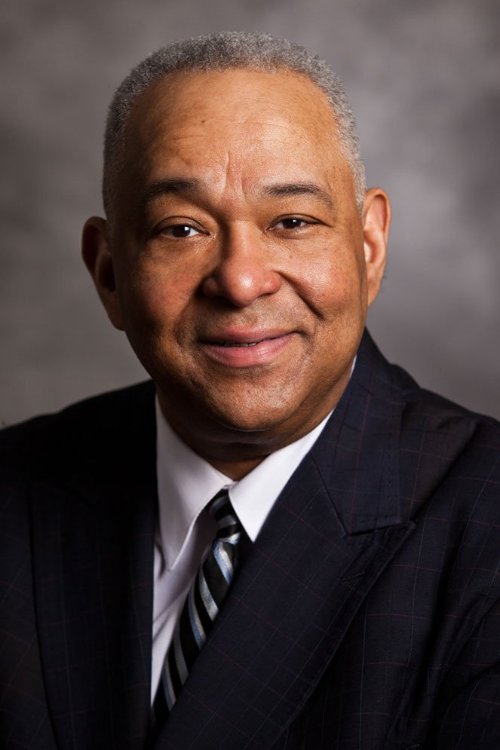 Abbington informs and entertains with wide variety of gospel music

Dr. James Abbington, a long-time friend of Calvin College, came on Monday to share a brief 100-year history of black gospel music in the United States. He gave his presentation in part by way of sound and video clips, show-casing the gifts of artists from Mahalia Jackson and Rosetta Tharpe to Andre Crouch and Kirk Franklin.

The clips were interspersed with commentary on the progression of gospel music in the past 100 years and a musical demonstration that showed how a New Orleans-style jazz number from the early 20th century was essentially the same song as a gospel hymn from the same period.

Abbington highlighted the major features of black gospel music with its "emotional and jubilant improvisation" and "full-throated sound" that "paints a highly emotionally-charged lyric." The music at its core invites participation (toe-tapping, clapping, shouting, dancing), harkening back to the days when gospel music consisted of spirituals sung together while working in the cotton fields. The physical response-inducing tunes have now been adapted to the urban settings where African Americans now by and large live. Rap music, some gospel experts say, is the outcropping of the themes and rhythms of black gospel music and black preaching mixed with the shift to urban living.

In closing Abbington urged the church to ponder the importance of gospel music and, when appropriate, actually try to sing some of it.

Dr. James Abbington is an Associate Professor of Music and Worship at Candler School of Theology at Emory University in Atlanta, Georgia.

100 Years of Black Gospel Music in an Hour
Part of the: January Series