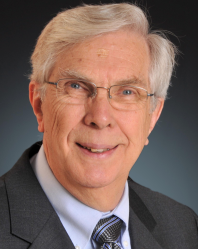 Dr. Stephen V. Monsma, Senior Fellow at the Henry Institute, passed away on February 18, 2017. His role with us at the Institute capped a remarkable career of service in the academy and government, with Calvin College bookending that career. Steve taught at Calvin throughout the tumult of the late 1960s and early 1970s, before serving in both the Michigan House (1974-78) and Senate (1978-82). He taught at Pepperdine from 1987 to 2004, and along the way served on the boards of Bread for the World and the Center for Public Justice, among other organizations. When I asked him a few years ago why he had left Malibu for a “retirement” in Grand Rapids, Steve responded without a hitch: “Because this is where you go to do good work in the Reformed tradition.” He meant that, and indeed wrote much of his best work in his last decade. (You can find a short list of Steve's work here: https://calvin.edu/directory/people/stephen-v-monsma.)

Steve was a first-rate scholar who combined his experience in the nitty-gritty of policy-making and politics with a deeply biblical vision of public justice. He was especially concerned with how government might partner with civil society to advance the social welfare of the least advantaged. He often dealt with controversial issues, but he worked with a committed yet humane and generous spirit. He was disarming that way.

Steve’s teaching and political career started in Grand Rapids. But it would not be quite accurate to say that he merely came out of the tradition of west-Michigan political activism that has often both challenged and moderated ideological extremes. Rather, he helped build that tradition. That’s probably illustrated in no better way than Steve’s friendship and collaboration with Paul Henry, who was Steve’s colleague as a Calvin political science professor and co-author, and then as a state legislator. They came from different parties – Steve a Democrat, Paul a Republican – but while they could have a partisan edge, they didn’t fall prey to encrusted partisan identity. They knew that far greater purposes were at stake than their party attachments. It is easy to become wistful and wonder if their approach is possible today, but I often remind myself that they faced their own intense pressures and managed to break through with a distinctive Christian witness.

There is much more to say about Steve’s public witness. But I think it is worth hearing his own words in the wake of Paul Henry’s death in 1993, which reveals something about both of their aspirations:

In Paul’s day and in ours there is much too much politics of the self-interested variety and much too little concern for justice. We have more than enough cheap, self-interested, egotistical politicians with inflated opinions of their own importance. They are still too much with us. Paul was one of those public servants who truly earned the appellation ‘public servant’ by diligently seeking to care for the weak and needy by promoting justice in our land….

What a fitting description of my friend Steve as well.

Our prayers are with his wife, Mary and their children, Martin and Elizabeth and Kristin and Patrick, as well as grandchildren (Caitlin, Will, Henry and George) and Steve's sisters, Hester Monsma and Joanna VanGent.